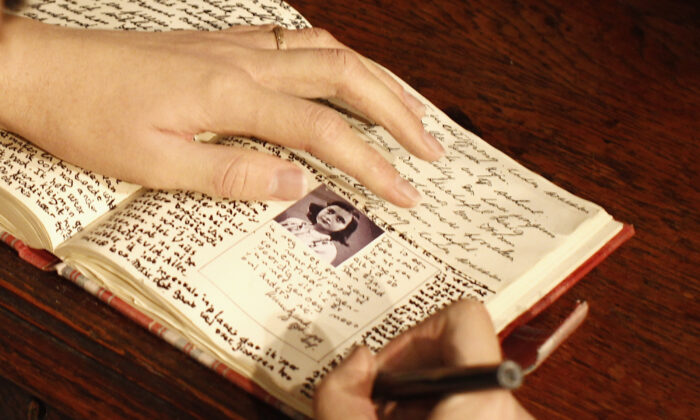 A detail of the diary of the wax figure of Anne Frank and their hideout reconstruction is unveiled at Madame Tussauds in Berlin on March 9, 2012. (Andreas Rentz/Getty Images)
Education & Family News

A Texas school has removed books “replete with graphic, gratuitous, sexually-explicit content,” including depictions of incest, rape, and homosexuality, that are on a list of challenged books which also includes an illustrated adaptation of Anne Frank’s diary and the Bible.

The issue came to light on Wednesday when a staff member from Keller Independent School District (ISD) sent an email requesting that all of the books that were challenged over the last year be removed.

“Attached is a list of all books that were challenged last year. By the end of today, I need all books pulled from the library and classrooms,” the email from a school official reads.

The Bible and an illustrated adaptation of “The Diary of Anne Frank” are on the list of books that were removed to be reviewed. All books on the “challenged books” list are reviewed by a committee.

Also among the books removed was “Out of Darkness,” a historical novel that contains incest and sexual abuse; “All Boys Aren’t Blue,” which depicts explicit homosexual sex; and “The Bluest Eye,” a 1970 novel that depicts incestuous rape.

Excerpts showing depictions of the sexually explicit content in some of the books on the list are included in a video on YouTube calling for their removal posted by an account called the Keller ISD Family Alliance.

These books were previously flagged on the challenged books list and approved to remain available to students by a committee of community and staff members.

Keller ISD responded to reports about the matter, explaining that the review was prompted by policies approved at an Aug. 8 special school board meeting.

“These policies relate to the acquisition and review of instructional materials and library books,” Keller ISD said in a statement. “Right now, Keller ISD’s administration is asking our campus staff and librarians to review books that were challenged last year to determine if they meet the requirements of the new policy.”

The school district said that books that “meet the new guidelines will be returned to the libraries as soon as it is confirmed they comply with the new policy.”

Charles Randklev, president of the Keller ISD board of trustees, said the district’s new policy replaced a “flawed” old policy which “exposed children to pornographic material.”
‎
“How does sexually-explicit content meet specific student reading needs? How does it strengthen information literacy or critical thinking skills? How does it create empathy towards other groups of individuals? How does it contribute positively to the school culture? How does it align with state and district learning standards?” he said.
‎
“Also, what does that say about our education system … that certain student groups can only be reached through the lens of graphic sexual content. This is unconscionable.”

The book removal was exposed by Laney Hawes, who said she previously served on a Keller ISD book challenge committee, on social media.

“Just got word that today, the day before school starts, [Keller ISD] has informed teachers [and] librarians to remove all previously challenged books from school shelves. Even the books that passed the challenge committees,” she wrote on Twitter on Wednesday.

In her Twitter thread, Hawes included a screenshot of the email and the list of 43 books, which included two instances challenging the Bible.

“These books went through the official district established challenge committee process,” Hawes added. “But because they all passed the committee process, our extremist Christian nationalist school board decided the process was ‘rigged.’ Sound familiar? (2020 election).”

Regarding the Bible’s inclusion on the challenged books list, Hawes said she thinks it was added “by someone to make a point.”

“It illustrates that some books address topics and have themes that aren’t all sunshine and rainbows,” Hawes told The Epoch Times. She added that removing books “based on a checklist rather than looking at the value of a book as a whole” was “a great disservice to kids.”

“And every book isn’t appropriate for every child or every age, but that decision should be made by parents for their own children,” she added.

Hawes noted that “Anne Frank’s Diary: The Graphic Adaptation,” which she helped approve as a former book challenge committee member, was among the books removed from shelves.

Randklev rejected the claim that the district is banning books, calling it “false.”

‎Randklev noted that some of the books on the list such as “Gender Queer” are “replete with graphic, gratuitous, sexually-explicit content … and have no place in the hands of children.”

‎”For those who are unaware or need a reminder, the Board approved new policies on instructional materials (EFA and EFB local) to protect kids from sexually-explicit content, which has found its way into our schools,” he added.

This report was updated to include Hawes’ remarks.