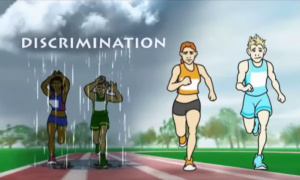 A nine-year-old girl was pulled out of class due to “unacceptable” hair.

Marian Reed says her daughter, a student at Tarver Elementary School in Belton, Texas, was discriminated against for her natural hairstyle.

Since her daughter’s hair does not lie flat, Reed styled it into a series of tiny pony tails, also known as “afro puffs.”

During a physical education class, the school’s assistant principle pulled the third grader out of class and told the child that her hair was not in compliance with the school’s dress code.

Madonna Lopez is listed as the assistant principle on the school’s website.

Yet Belton Independent School District (BISD) officials claimed the afro puffs resembled a fauxhawk, a hairstyle similar to a mohawk, both of which are banned by the school’s dress code.

No part of the nine-year-old’s hair was shaved, noted Reed, which is required to be considered a fauxhawk or mohawk.

“I don’t believe that it was intended to be racial,” Reed told KCEN News. “But, I think, the district as a whole may need some cultural diversity training.”

“She cried and said no one was going to want to be her friend because her hair was not as pretty as the assistant principal’s,” Reed said, recounting the evening after the incident occured. “And, as a parent, that’s heartbreaking because that’s just what God naturally gave her.”

“They could have called me and discussed it with me without pulling her out of class and without having that conversation in front of her” continued Reed. “Now she’s questioning her natural image.”

On May 2, BISD’s Executive Director for Campus Leadership Charla Trejo addressed the incident.

“Do we need training? We are always willing to train and to learn and do things,” Trejo said. “However, this particular situation was about consistency. It was about making sure we have the same expectations for everyone.”