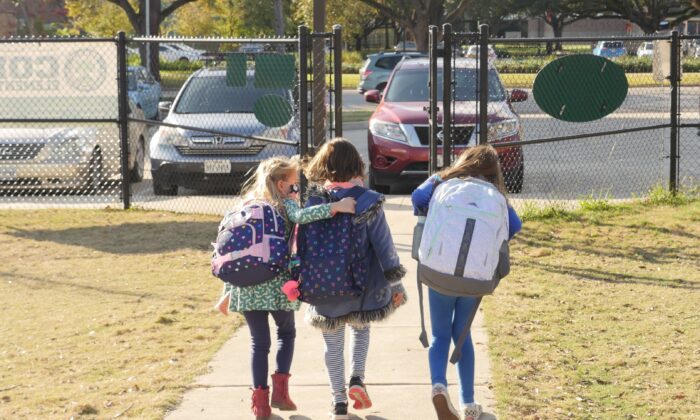 Texas has become the latest state to sever ties with the National School Boards Association (NSBA) after an internal investigation disclosed more details about the national group’s effort to work with the Biden administration to potentially target concerned parents.

The Texas Association of School Boards (TASB) on Monday said it had been “actively monitoring” how the NSBA handled the fallout caused by a letter (pdf) sent to President Joe Biden on Sept. 29, 2021, in which disruptions at school board meetings were characterized as “a form of domestic terrorism and hate crime.”

In the letter, the NSBA further alleged that “public schools and its education leaders are under an immediate threat,” urging the federal government to invoke counterterrorism laws to quell “angry mobs” of parents seeking to hold school officials accountable for teaching critical race theory and other forms of Marxism and for imposing COVID-19 mask mandates on their children.

The letter also served as part of the basis for a Justice Department memo, which directs federal law enforcement to work with local authorities to address an alleged “disturbing spike” in threats of violence against teachers and school leaders.

On May 20, almost eight months into the controversy, the NSBA finally released a report on the circumstances surrounding the notorious “domestic terrorism” letter. The Texas chapter, however, said it was not only unimpressed by the report but decided to end its membership with the NSBA because of what the report revealed.

“With this report now available, it’s clear that NSBA’s internal processes and controls do not meet the good governance practices that TASB expects and requires in a member organization,” said TASB Executive Director Dan Troxell.

According to the 55-page report (pdf) compiled by third-party investigators, an early draft of the letter went as far as to ask the Biden administration to call in the National Guard to police school board meetings.

“We ask that the Army National Guard and its Military Police be deployed to certain school districts and related events where students and school personnel have been subjected to acts and threats of violence,” the draft read in part, according to the report.

The report also includes a detailed timeline of how the letter was crafted, including which NSBA official, at which point, made what comments or edits regarding the letter’s content. According to the report, then-interim chief Chip Slaven originally referred to parents who voiced opposition to school policies as “plotters.” The term was replaced by “individuals and hate groups” in the final draft.

In addition, the report confirmed that Mary Wall, a senior adviser to Biden, had “advance knowledge of the planned Letter and its specific contents” and continued to have conversations with Slaven regarding the letter during its drafting.

According to the report, Slaven talked to Wall about his concerns and requested assistance from the White House as early as Sept. 9, 2021, the same day he directed a few NSBA executives to work on what would become the “domestic terrorism” letter. On Sept. 21, Slaven, per Wall’s request, provided her a list of “egregious examples” of alleged school board threats and disruptions, so that White House officials could “include” the planned contents of the letter in discussions with Justice Department officials on Sept. 22.

Meanwhile, the NSBA members were largely kept in the dark about the collusion between their leadership and the White House, the report said.

“The evidence revealed limited knowledge about the drafting and existence of the Letter before it was officially sent to the White House,” the report concluded. “The Review did not find evidence that most NSBA officers, board members, senior staff, or executives contributed to or were aware of the Letter while the Letter was being drafted.”

Including the TASB, 23 school board groups have so far terminated their NSBA membership. Many of them cited disagreements over the characterization of school board meeting disruptions, the idea that federal intervention is needed in handling those disruptions, or both.