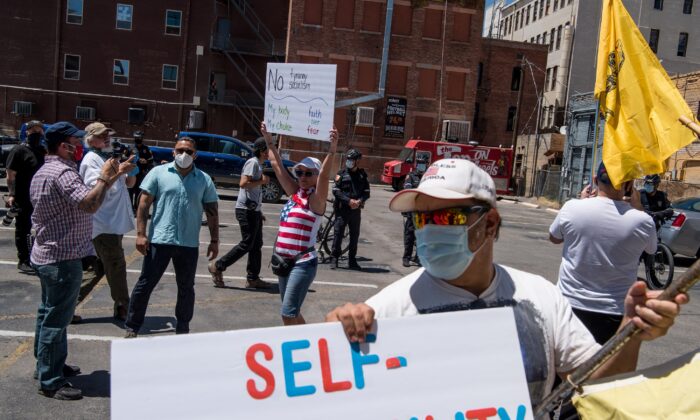 Protestors gather outside the El Paso County Court House during a rally calling for the reopening of El Paso and Texas in El Paso, Texas on April 25, 2020. (Cengiz Yar/Getty Images)
AMERICA

The Texas Department of Health said Saturday there more than 1,800 new cases of the CCP virus were reported Saturday, the highest number so far in the Lone Star State.

The new figures come as Texas officials started testing more in areas that were deemed a high risk—and it also comes as some businesses reopened after being shuttered for weeks.

734 of 1,801 new cases reported are from Potter and Randall counties. These counties’ new cases are largely from targeted testing of employees at meat plants in the area. More test results from plants are expected.

As the Department of State Health Services confirmed the number of cases, it’s not clear if the surge is due to more testing or if the virus is spreading more rapidly because of the reopening of some businesses.

The agency noted that 734 of the new cases were confirmed in Potter and Randall counties. However, Texas, as compared with New York or California, has far fewer cases and deaths. Currently, data shows that New York has more than 20,000 deaths, while California has seen at least 4,000.

“These counties’ new cases are largely from targeted testing of employees at meat plants in the area. More test results from plants are expected,” the Texas department of health wrote.

And after the figures were released, Gov. Greg Abbott said the surge can be attributed to response teams sent to Amarillo earlier in the month.

“That is exactly why I established Surge Response Teams,” Abbott said. “By immediately deploying resources and supplies to these high-risk areas, we will identify the positive cases, isolate the individuals and ensure any outbreak is quickly contained, which is the strategy being deployed in Amarillo.”

The decision to reopen economies is up to state and local municipalities, coming after the White House released guidelines recommending that regions and states experience a 14-day decline in cases before restrictions on businesses and other activities are eased.

Abbott has been attempting to re-open the state economy, allowing restaurants, malls, movie theaters, and retail stores to open up at 25 percent capacity starting May 1. Hair salons and barbershops were allowed to open May 8.