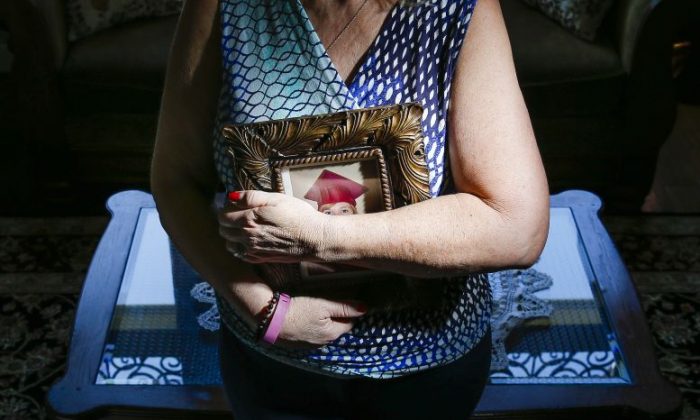 In this Wednesday, July 20, 2016 photo, a mother, who wished not to be identified, stands in Cypress, Texas, with a picture of her mentally ill daughter who was raped and then jailed after she had a psychological breakdown on the witness stand while testifying against her attacker. They are now suing Harris County and the county's law enforcement agencies for jailing her over the Christmas holidays. (Michael Ciaglo /Houston Chronicle via AP)
US

Texas Rape Victim Who Was Jailed After Breakdown Files Lawsuit

HOUSTON  — The 25-year-old rape victim, frightened and long-suffering from mental illness, agreed in December to testify against the Houston man who brutally assaulted her in 2013.

She hoped to put him behind bars for life.

But that decision landed her in the Harris County jail for more than a month over the Christmas holiday — terrified, helpless and hopeless, according to a federal lawsuit filed this week in Houston.

The woman, diagnosed with bipolar disorder and schizophrenia, had a mental breakdown on the witness stand and then was jailed by Harris County prosecutors who feared she wouldn’t come back to court.

“They didn’t care. They got what they wanted,” the woman’s mother told the Houston Chronicle on Wednesday about the Harris County District Attorney’s Office. “She was collateral damage and they didn’t care what happened to her.”

News about the case shocked Houston’s defense attorneys and advocates for rape victims.

“That is beyond ludicrous,” said Lavinia Masters, a sexual assault victims advocate. “I’m amazed that a judge would allow that. You’re further victimizing a victim.”

District Attorney Devon Anderson said the woman, who was homeless when she was raped, was going through a “life-threatening mental health crisis” and told prosecutors she was not going to return to testify.

“If nothing was done to prevent the victim from leaving Harris County in the middle of trial, a serial rapist would have gone free — and her life would have been at risk while homeless on the street,” Anderson said in a video statement. “This was an extraordinarily difficult and unusual situation. There were no apparent alternatives that would ensure both the victim’s safety and her appearance in trial.”

She defended the prosecutor named in the lawsuit, Nicholas Socias, and said any claim that her office does not support crime victims is “outrageous.”

The woman is identified as Jane Doe in the lawsuit. The Houston Chronicle is not naming the mother because of its policy not to identify victims of sexual assault.

The lawsuit accuses the district attorney’s office, the Harris County Sheriff’s Office, prosecutors and jailers of violating the woman’s constitutional rights. The suit says she was attacked and abused by inmates and jailers, and was briefly charged with assaulting a jailer.

Her mother said she had a black eye when she finally was released in January.

Jailing a witness to ensure they testify is an unusual move in Harris County, especially when the witness is not also facing criminal charges. Over the past two decades, there have been a smattering of published accounts of rape victims being jailed across the country.

Officials with the Houston Area Women’s Center said respecting the dignity of survivors and providing full support are paramount.

“We have no direct knowledge of this particular case, but are concerned that sexual assault is already under-reported and that this may further deter survivors from coming forward,” said Rebecca White, the center’s chief executive officer.

The young woman’s saga began like the plight of many mentally ill people who stop taking their medication. She ended up homeless on the streets of Houston, her mother said, where she was violently assaulted by serial rapist Keith Edward Hendricks, a vagrant later convicted of luring homeless women to abandoned buildings and raping them while brandishing simple weapons such as box cutters.

After Hendricks was arrested, prosecutors built a case against him that included analyzing DNA from rape kits. That led them to the young woman, who is now married and lives in an apartment in a small town in EastTexas.

By agreement, investigators picked her up on Dec. 7 and brought her to Houston for the trial, her mother said.

A day later she took the witness stand and tried to tell her story, but had a psychological breakdown. She was found walking in traffic in front of the Criminal Courthouse in downtown Houston before being committed to a psychiatric ward in a hospital, according to her attorney.

Prosecutors told the woman’s mother that she would get the best care available. They did not tell her they had gotten a court order to jail her as a material witness.

The woman’s mother thought she would return to the family’s Houston-area home to wait to go back to court. But when she was released from the hospital on Dec. 18, an armed investigator with the district attorney’s office handcuffed her and took her to the Harris County Jail.

Booking records suggested she was a suspect of sexual assault and not a witness, according to the lawsuit. The sheriff’s office on Wednesday said she was housed in the general population because there was no order to isolate her.

“Had an order to ‘keep separate’ been issued, (the woman) would have been housed in a separation cell in accordance with the court’s order,” sheriff’s officials said in a written statement.

Sean Buckley, the attorney representing the woman, noted that the district attorney’s office, the largest inTexas, has an entire division dedicated to helping victims, including shepherding victims’ families to court and making sure they understand the process.

“It goes beyond just negligence,” Buckley said. “The DA’s office could have resolved this by just giving her victims’ services and helping her instead of trying to control her out of laziness.”

Buckley said he has occasionally seen the procedure used, but never for a victim of rape.

“Because the prosecutors and the victim-witness division employees were scheduled to be on vacation over the holiday break, they did not want the responsibility of having to monitor Jane Doe’s well being or provide victim services to her during the holiday recess,” Buckley wrote in the suit.

Other Houston lawyers agreed that it was an unusual order.

“There should be a less oppressive and less coercive way to get her to testify,” said Vivian King, a lawyer who is not connected to the case. “The way she was treated was deplorable. We already use jail too much.”

While in the jail’s general population, the woman was attacked by another inmate, who smashed her head into the concrete floor, according to the suit.

As the days stretched into weeks, she was unable to get medication routinely. When she pleaded for psychiatric help from the medical staff, she was refused, the suit says.

“The Harris County Jail psychiatric staff believed that Jane Doe was disoriented because she absurdly believed she was an innocent rape victim,” according to the lawsuit. “Jane Doe found herself hopelessly trapped in a bizarre plot pulled from a Kafka novel.”

Before she was able to testify, Buckley said, she had another psychiatric breakdown. Jail records show that she was in her cell screaming at a wall with her hands in the air, pleading for help from God.

That episode led to an altercation with jailers. Flailing around as she was being pulled out of the cell, she apparently took a swing and caught a female jailer in the face. That jailer returned the punch, giving the woman a black eye. She was then charged with assaulting a jailer, a felony that remained pending until after she testified.

The judge who signed the order to jail the woman as a witness had the assault charge moved to another court, writing that she was sympathetic to the young woman.

“This defendant testified as a complaining witness in a jury trial before me. I have a great deal of sympathy for this individual,” state District Judge Stacey Bond wrote on the transfer order. “It would be improper for me to oversee her case. I would feel terrible about punishing her.”

The charge was dropped after she testified.

Buckley, the woman’s attorney, said he had no quarrel with the judge, because she was relying on statements from prosecutors. The judge did not return calls for comment.

On Jan. 11, the woman returned to court and testified against Hendricks, who was convicted and received two life sentences.

During the month the woman was in jail, her mother had been frantically calling and e-mailing officials without result. She said prosecutors lied to her and then misled her about whether her daughter could be released.

She finally reached a kind ear with an official in the County Attorney’s Office and her daughter was released on Jan. 14, more than a month after she was first committed.

When she was released, the mother cried as she hugged her daughter again.

It had been frustrating, the mother said Wednesday, because her daughter was locked up without being charged. No attorney had been appointed to her case and she was denied the general protections afforded to the thousands of suspects in the jail.

She is seeking unspecified damages in her lawsuit, but her attorney said it could end up costing the county millions of dollars.

“The only response from anyone should be, ‘I am so sorry. This is something that we need to look at very closely, we are investigating it and this is just tragic,'” Buckley said. “Any other kind of wiggling out of it is just another version of victim blaming.”