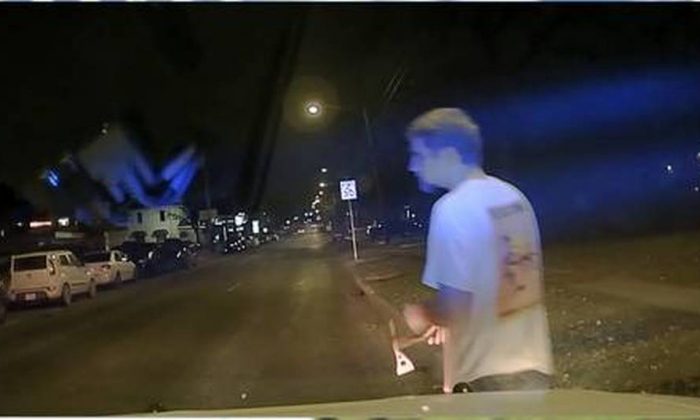 Texas Rangers Release Video From Fatal Shooting of 21-Year-Old UNT Student. It All Unfolds in About 15 Seconds

Texas Rangers on Wednesday released dashcam video of the fatal shooting of 21-year-old University of North Texas student who approached an officer with an ax.

The officer-involved shooting takes just about 15 seconds to unfold after UNT police Cpl. Stephen Bean exits his car to confront the suspect, identified as Ryan McMillan.

He can heard in the video ordering the suspect to “back away” several times.

As Bean retreats, the student is seen continuing to walk towards the officer while still holding the ax.

McMillan can also be heard yelling in the video, “Shoot me!”

NBC DFW obtained footage of the shooting (WARNING: Some viewers might find the video disturbing. The station paused the video so it doesn’t actually show the shooting, but the audio is still heard):

“I’ve got a white male down with a hatchet in his hand,” the officer says in the video after the shooting.

The New York Daily News reported that McMillan was shot on his birthday after cops got a call of a man breaking car windows with an ax.

“He just seemed like a normal person that would never do anything like that or try to hurt anyone,” Lindsey Norman, who knew McMillan in high school, was quoted as saying by the Daily News.

The university said McMillan was a sophomore transfer student from Fort Worth, Texas.