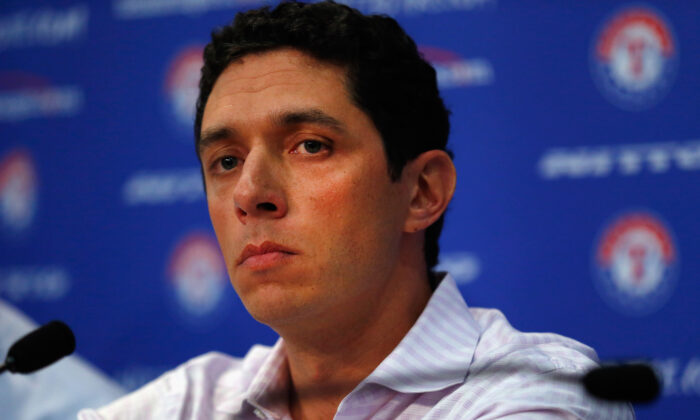 President of Baseball Operations and General Manager Jon Daniels of the Texas Rangers talks with the media at Globe Life Park in Arlington in Arlington, Texas, on Sept. 5, 2014. (Tom Pennington/Getty Images)
Baseball

The Texas Rangers relieved Jon Daniels of his duties as the team’s president of baseball operations on Wednesday.

Per the Rangers, executive vice president and general manager Chris Young will oversee the team’s operations department. Young was hired by the Rangers in December 2020 to work with Daniels.

The Rangers entered play on Wednesday with a 52–64 record and are in line to miss the playoffs for the sixth consecutive year. They are 22 games behind the division-leading Houston Astros in the American League West.

“This morning I informed Jon Daniels that his contract would not be renewed at the end of the season and that he is being relieved of his duties effective immediately,” said Ray Davis, the Rangers’ managing partner, and majority owner.

“Jon’s accomplishments in his 17 years running our baseball operations department have been numerous. He and his staff put together the best teams in this franchise’s history that resulted in five playoff appearances and two American League pennants between 2010 and 2016. His impact on the growth of our player development, scouting, and analytics groups has been immense. Jon has always had the best interests of the Rangers organization in mind on and off the field and in the community.

“But the bottom line is we have not had a winning record since 2016 and for much of that time, have not been competitive in the AL West division. While I am certain we are heading in the right direction, I feel a change in the leadership of the baseball operations department will be beneficial going forward.”

Daniels termed himself as thankful for his tenure with the Rangers in a statement he released Wednesday evening.

“Somewhere along the way, this baseball fan from Queens got an opportunity to help lead a Major League Baseball franchise in Texas,” Daniels said. “It’s been an unbelievable experience. My family and I are incredibly thankful to so many people along the way.

“To (former GM) John Hart and (former owner) Tom Hicks, who gave an eager kid one opportunity after another, and for believing in me when the reasons to do so weren’t always clear. To Ray Davis and the Rangers ownership group, for providing us with a steady hand in challenging times, and the resources and support needed to build.

“… To every player, coach, scout, trainer, and staff member I’ve had the privilege to work with. You are the reason I loved every minute of this job. The shared experiences, good and bad, are the things I cherish most. Excited to watch what you build from here.”

“Chris Young is one of the top young baseball executives in the business and in his 21 months on the job has brought welcome energy and new ideas to the organization. I am confident in Chris’ ability to lead our baseball operations with the goal of producing a consistent winner on the field.

“I want to thank Jon for being a great partner for this ownership group over the last 12 years, and I wish him and his family the best for the future.”