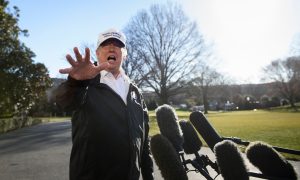 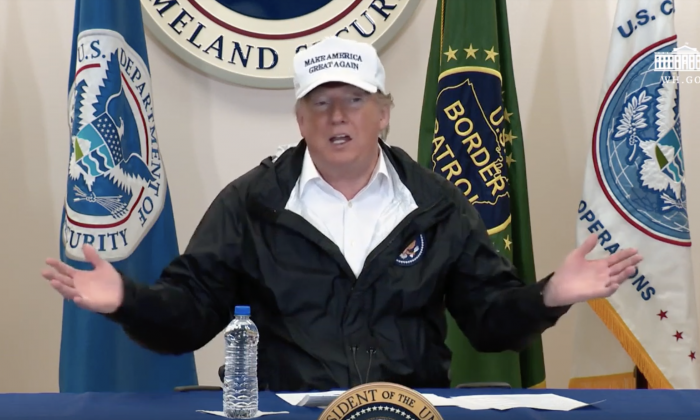 A Texas rancher has shown appreciation for President Donald Trump’s border security efforts by offering his belt buckle as a gift to the commander-in-chief’s son Barron, 12.

The touching moment happened during the roundtable discussion of immigration and border security where Trump met with border patrol officials and local residents in McAllen, Texas, on Jan. 10.

Rancher Monty Awbrey handed the large belt buckle as a gesture of thanks, showing his appreciation for the president’s efforts to build a wall at the southwest border.

Texas landowner gives @realDonaldTrump his belt buckle after border security roundtable. "You can give it to your son Barron." pic.twitter.com/QvVUe43zEo

“You can give it to your son, Barron,” Awbrey said as he handed the president the buckle.

Earlier Awbrey, who grew up in the Rio Grande Valley, shared his story about encountering illegal immigrants on his ranch, many of whom were in distress or had been sexually assaulted after being brought in by people smugglers.

“These [illegal immigrants] pay $3,000 a piece to come across.  It’s everything that they garnish up, you know, wage wise, to pay these people,” Awbrey said.

He claimed the people smugglers then “walk them 10 miles across the border, walk them around in a brush, and disappear on them.”

“They’re lost. They’re hopeless. They don’t know what to do. So they give up and they say, ‘Can you call Border Patrol for me?'” he said.

At the start of the roundtable, the president addressed border patrol agents and immigration officers, thanking them for their hard work. He used the opportunity to express the importance of building a wall while slamming the Democrats and mainstream media for calling the immigration situation a “manufactured crisis.”

“Democrats have refused to listen to the border agents, and they say this is a manufactured crisis,” he said. “All over, I turn the television. You know, I call it the opposition party. It’s called the fake-news media, and what happens is every network has [reported]: “manufactured crisis.'”

There is GREAT unity with the Republicans in the House and Senate, despite the Fake News Media working in overdrive to make the story look otherwise. The Opposition Party & the Dems know we must have Strong Border Security, but don’t want to give “Trump” another one of many wins!

Trump described building a wall as “common sense” because it works, likening it to wheels on a car.

“They say a wall is medieval. Well, so is a wheel. A wheel is older than a wall,” the president said. “And I looked, and every single car out there, even the really expensive ones that the Secret Service uses—and believe me, they are expensive—I said, ‘Do they all have wheels?’ ‘Yes.’ Oh, I thought it was medieval … a wheel works and a wall works.”

Trump warned the Democrats’ open border agenda threatens all American families. He also praised the work of ICE officers in arresting criminal aliens, charged with or convicted with about 100,000 assaults, 30,000 sex crimes, and 4,000 violent killings in the last year.

From the Southern Border…. pic.twitter.com/Vgsf5nEZUH