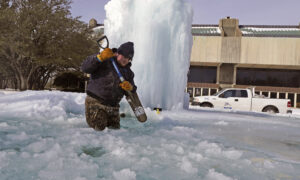 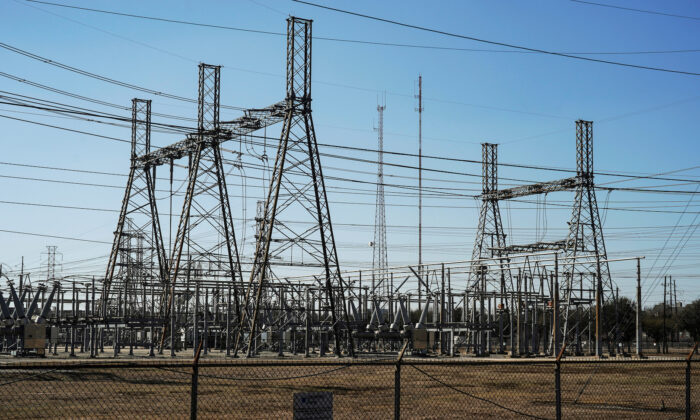 An electrical substation is seen after winter weather caused electricity blackouts in Houston, Texas on Feb. 20, 2021. (Go Nakamura/File Photo via Reuters)
US News

A Texas resident has filed a class action lawsuit seeking over $1 billion against power retailer Griddy Energy LLC, alleging the wholesale company of engaging in “price gouging” and unlawfully charging thousands of dollars.

Lisa Khoury of Chambers County claims she was charged with an excessive electricity bill during a deadly winter storm that knocked many power supply facilities offline, according to a petition (pdf) filed with the Harris County District Court.

Attorneys representing Khoury said in the suit the utility customers’ bill for the period of Feb. 1–19 spiked to a total of $9,546. Her monthly bill normally averages between $200 and $250 and she usually keeps a $150 balance in her account to pay the bills.

Khoury said she tried to reach the company repeatedly after the retailer automatically withdrew eight times the amount of $150 from her bank account between the period of Feb. 13–18, totaling $1,200.

“Griddy charged Khoury in the middle of a disaster,” the suit noted, adding that she and her husband were mostly without power in their home between Feb. 17 and Feb. 18.

“At the same time, Khoury hosted her parents and in-laws, who are in their 80s, during the storm,” it explains. “Even then, she continued to minimize any power usage because of the high prices.”

During the power outages in Texas last week, wholesale prices soared to a maximum of $9,000 per megawatt/hour compared to the pre-storm rate of $50 per megawatt-hour.

Griddy, which launched in 2017, charges $10 a month to give people a way to pay wholesale prices for electricity instead of a fixed rate. It warned customers of rising prices and urged them to switch providers. The company said wholesale prices returned to normal as of Feb. 20.

The company has since released a statement on its website, explaining the company always takes “transparency” as their goal and provided an explanation on what’s been going down with the recent outrageous electricity bills. The company also vowed to fight the prices.

At Griddy, transparency has always been our goal. We know you are angry and so are we. Pissed, in fact. Here’s what’s been going down: https://t.co/6rShCYfJGu@PUCTX @ERCOT_ISO pic.twitter.com/mj43p8kG4C

“The PUCT [Public Utility Commission of Texas] left the directive in place and continued to force prices to $9/kWh, approximately 300x higher than the normal wholesale price,” the statement reads.

“For a home that uses 2,000 kWh per month, prices at $9/kWh work out to over $640 per day in energy charges,” it continues. “By comparison, that same household would typically pay $2 per day.”

Besides Khoury, there are likely thousands of other utility customers charged with costly electricity bills. A man living in Arlington was shocked after he was charged more than $17,000 from Griddy over a period of just five days, Fox News reported.

State lawmakers on Thursday started digging into the causes of the deadly power blackouts that left millions shivering in the dark as frigid temperatures caught its grid operator and utilities ill-prepared for a skyrocketing power demand.

Hearings are highlighting shortcomings by grid planners, electric utilities, natural gas suppliers, and transmission operators that led to billions of dollars in damages and dozens of deaths. Consumer advocates have called for more stringent regulation of utilities and a review of retail marketing plans.

“Who’s at fault?” State Representative Todd Hunter demanded of utility executives. “I want to hear who’s at fault. I want the public to know who screwed up.”

While executives said there were broad failures of leadership and preparation, the biggest was the state’s natural gas system, responsible for the largest share of Texas power generation, said Curtis Morgan, CEO of Vistra Corp. Texas is the country’s biggest producer of natural gas, but without better ties between gas producers, pipelines, and power plants, the state will face future cold weather outages.

“We just couldn’t get the gas at the pressures we needed,” said Morgan, who instructed employees to buy gas at any price but could not acquire enough to run plants.

Up to 48 percent of the state’s power generation was offline at times last week and at least 32 people died, including an 11-year-old boy of hypothermia in an unheated mobile home.