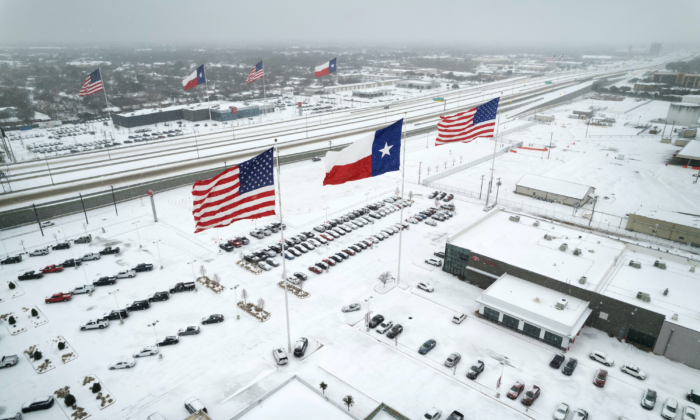 In an aerial view, U.S. and Texas state flags fly over car dealerships as light traffic moves through snow and ice on U.S. Route 183 on Feb. 3, 2022, in Irving, Texas. (John Moore/Getty Images)
Texas

In its first major test since crashing last February, the Texas power grid held steady as Winter Storm Landon swept through the state on Feb. 2, leaving snow, ice, and sub-freezing temperatures in its wake.

The Electric Reliability Council of Texas (ERCOT), the state’s independent power grid operator, reported that demand peaked at nearly 69,000 megawatts on the morning of Feb. 4—a number that triggered the blackout in 2021, which left millions in the dark for days and contributed to hundreds of deaths.

In a live news conference on Feb. 4 on state’s response to Winter Storm Landon, Texas Gov. Greg Abbott credited the grid’s strength to a variety of proactive strategies, including winterization, the availability of alternate fuels, the designation of natural gas facilities as critical infrastructure, and a 15 percent increase in power generation capacity compared to 2021.

“The Texas power grid is more reliable and resilient than it has ever been, and we are continuing to actively respond to the impact of this winter storm,” Abbott said.

Major issues in 2021 during Winter Storm Uri included a reduced flow of natural gas to power plants, natural gas supply issues, and frozen wind turbines that cut electricity production. In 2022, state officials said they weren’t concerned because the grid has plenty of excess power. At the height of power generation, more than 86,000 megawatts of power were available, according to state officials.

Commissioner Christi Craddick of the Texas Railroad Commission, which regulates oil and natural gas in the state, said during the news conference that fluctuation in production had been brief and within the norm, even as icy roads hindered distribution.

“The system is working as it should,” Craddick said.

ERCOT confirmed instances of gas curtailments, particularly in the Dallas area, but said they weren’t major.

“The loss of available reserves is expected to be between 1,200 and 2,600 megawatts,” ERCOT told The Epoch Times in an email.

At least 70,000 customers in Texas were without power on Feb. 3 because of local issues such as downed power lines affected by ice-draped trees, according to officials. On Feb. 4, that number was reported to be 20,000 customers at the time of the midday news conference.

Icy roadways snarled traffic in some areas of Texas. Two accidents on Interstate 10 West near Kerrville, Texas, involving 18 wheelers brought traffic to a virtual standstill for more than 10 hours, leaving some motorists stuck on the interstate running low on fuel.

Josh Rhodes, an energy expert with the Webber Energy Group at the University of Texas, Austin, told The Epoch Times that the state’s grid passed the test this time.

“The final exam wasn’t as hard as last year. The lights stayed on. I’d give them a B,” Rhodes said.

Rhodes said the 15 percent increase in power generation capacity mentioned by the governor was mainly because of increased reliance on wind farms and battery storage capacity.

Rhodes said wind generated another 5,000 megawatts more than the 7,000 megawatts expected during the winter storm. But he pointed out that temperatures weren’t as cold and freezing precipitation wasn’t as ubiquitous as it was in 2021. The wind was blowing during the 2022 winter storm, while it dropped off significantly during Uri.

Natural gas power plants seemed to be better prepared in 2022 by incorporating the ability to burn diesel as an alternative fuel in case of natural gas delivery issues. Communications have also improved, he said.

S&P Global Platts, which provides analysts of the commodities market, reported that initial production estimates on Feb. 3 show Texas’s Permian production dropped by 12 percent compared with the prior week average because of prolonged freezing temperatures.

Rhodes said while that kind of production drop might be normal and acceptable in a less severe weather event such as Landon, they stand to be more dramatic and potentially devastating should another storm such as Uri hit the state.