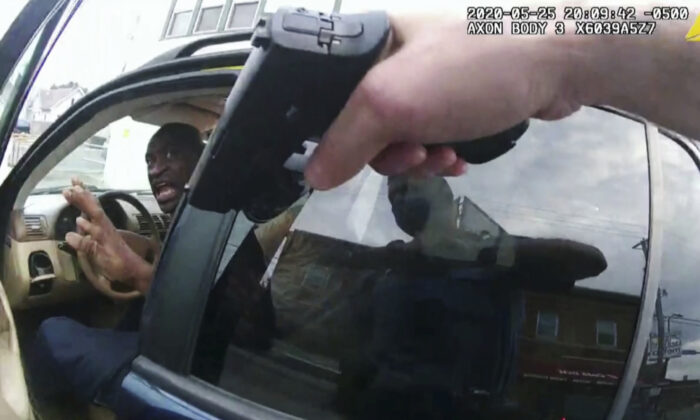 The parole board for Texas on Monday voted to recommend a posthumous pardon for George Floyd, the black man who died at the hands of police officers in Minneapolis last year.

The Texas Board of Pardons and Paroles voted 7–0 to recommend a full pardon of a drug charge Floyd pleaded guilty to in 2004, according to minutes of a meeting obtained by The Epoch Times.

“We lament the loss of former Houstonian George Floyd and hope that his family finds comfort in Monday’s decision,” Harris County District Attorney Kim Ogg, a Democrat, said in a statement.

Ogg earlier this year asked the board to recommend a pardon. She cited the involvement of Gerald Goines, a former police officer who made the arrest of Floyd with crack. Goines is currently facing two murder charges.

A dozen officers connected to a Houston Police Department narcotics unit—of which Goines was a member—are having their work reviewed after a 2019 drug raid resulted in the deaths of two innocent people, according to The Associated Press. Thousands of cases handled by the unit are being reviewed by prosecutors, and more than 160 of Goines’s drug convictions have been dismissed.

Ogg sent a letter to the board on April 28 that said, “We do not support the integrity of Mr. Floyd’s conviction and agree these circumstances warrant a posthumous pardon.”

A spokesperson for the board told The Epoch Times in an email that they do not comment on individual clemency recommendations.

“A recommendation is rendered on each case after the totality of information is considered,” she said.

Texas Gov. Greg Abbott, a Republican, now has to decide whether to take up the recommendation. His office did not respond to a request for comment.

A convenience store clerk in Minneapolis, the largest city in Minnesota, called police on Floyd on Memorial Day 2020 because he believed the man had used a fake $20 bill. Officers found Floyd and placed him under arrest. After he resisted, officers held him on the ground for approximately nine minutes. He stopped breathing. A coroner concluded that the officers’ actions led to his death and former officer Derek Chauvin was convicted in April of second-degree murder and other charges.

Floyd was convicted of multiple crimes during his life. The 2004 charge would be the first he’d receive a pardon for if Abbott follows the recommendation.