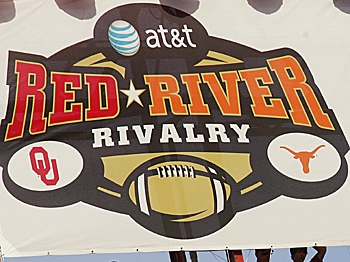 While the Ferris wheel turns and “Big Tex” greets fair goers with his “Howdy folks!” outside, the top two teams in the Big 12 South will be battling it out in the annual Red River Shootout inside.

While these two teams share a border, they will not share much else. Even the fans will segregate with the burnt orange Texas fans on one side of the 50-yard line and the crimson-clad Sooners fans on the other.

This cross-state rivalry has gained intensity since the formation of the Big 12 in 1996.

Texas quarterback Colt McCoy said about the rivalry, “They are the games you remember because of the tradition, the rivalry, and just how big a conference game it is.”

Oklahoma has a slight upper hand since the formation of the Big 12, with a 7–6 record, including a five-game win streak between 2000 and 2004. The Longhorns have only lost one game since then, including beating then No. 1 ranked Oklahoma last year 45–35.

Longhorns coach Mac Brown said in his weekly press conference, “It’s the game you look forward to all year. It’s a championship type game at midseason.”

The game has been a pretty consistent barometer for the South division champion. The winner of the game has gone on to represent the South in the Big 12 Championship game eight times in 14 years.

The major exception was last year when Texas won but later lost to Texas Tech in Week 10. OU beat Texas Tech three weeks later, forcing a tie in the South. OU was deemed the winner and went on to lose to Florida in the National Championship game.

The biggest match-up will no doubt be Longhorns quarterback Colt McCoy versus Sooners quarterback Sam Bradford.

Bradford, last year’s Heisman Trophy winner, has missed most of this season with a sprained AC joint in his throwing shoulder, suffered during the first game of the season against Boise State.

Last week was his first week back, and while he showed a little rust, he told reporters after the game how much it meant to be back. “It’s extremely gratifying just to get back on the field, just to be out there with the guys that I’ve put in so much work with in the off-season.”

Sooners coach Bob Stoops doesn’t believe they will have to modify the offense at all to accommodate for Bradford’s shoulder.  He told ESPN, “We feel good about where he is at and being able to make all the throws.”

McCoy has not been as impressive this year as compared to last, having already thrown six interceptions, but he still leads the nation in completion percentage.

Coach Brown came to the defense of his QB when questioned about his performance, “Just blame me and move on with it.”

Oklahoma has two loses this year, both to ranked teams and both without the services of Sam Bradford. Texas is still undefeated, but has not faced a real challenge, yet.

Coach Brown has heard the talk and said, “This game will be a measuring stick for us. We will know more about who we are when we walk out of this game on Saturday afternoon.”

It will be a beautiful, sunny day for the highly anticipated match-up. With the Big 12 South possibly on the line, expect another storybook Red River Shootout.