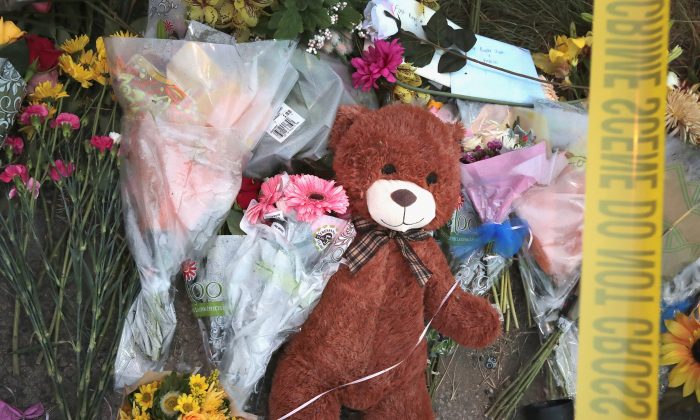 Texas Mom Shielded Children With Own Body During Church Massacre

Joann Ward did everything she could to protect her four children when a rifle-bearing man entered her small-town Texas church, shooting into the congregation on Nov. 5.

She pushed her 9-year-old Rihanna Garza to the ground and covered the three younger ones with her own body.

The shooter, who ended up killing 26 people, sent bullet after bullet Joann’s way. Her body was not shield enough.

When the shooter left the First Baptist Church of Sutherland Springs, Joann lay dead among the pews together with her 5-year-old Brooke Ward. Her 7-year-old Emily Garza was shot too and later died in a hospital due to a severed artery. Amid the bodies, 5-year-old Ryland Ward lay with four gunshot wounds to his stomach, groin, and arm. He survived.

Rihanna survived too—without serious injury. ‘‘I didn’t get shot because I was hiding, and Mama covered Emily, Ryland, and Brooke,” she said, according to a family friend Vonda Greek Smith’s Facebook post.

Joann’s husband, Chris Ward, skipped services that day after a night shift. He got the terrible news from his brother Michael, who lives a few blocks from the church and whose wife, Leslie Ward, heard the gunshots.

At first, Chris didn’t believe the news. “I’m not lying to you, Chris, they’re all shot,” Michael said.

When Chris realized what was going on, he immediately ran to the church. He didn’t even put his shoes on. Michael and Leslie rushed to the church too.

Leslie found the injured Ryland in the church and Michael carried him out. The boy was airlifted to a hospital and underwent extensive surgeries. He was in stable condition as of Sunday night.

He “will have a very long road back to full recovery,” said Smith, the family friend.

Smith shared some words of hardship but also appreciation for the support the community has received since the shooting.

“We truly feel the prayers of the whole world … just when we think we’ve gathered ourselves, the tears come again … and again … there’s no greater, deeper pain … we’re hemorrhaging over here in #SutherlandSprings—punched in the gut. … If we could just wake up from this nightmare and catch our breath!… God’s people, your love is encompassing us and we are gaining our strength—We tangibly FEEL it,” she wrote on Facebook.

She also shared what she said was the only confirmed GoFundMe fundraising campaign for the Ward family.