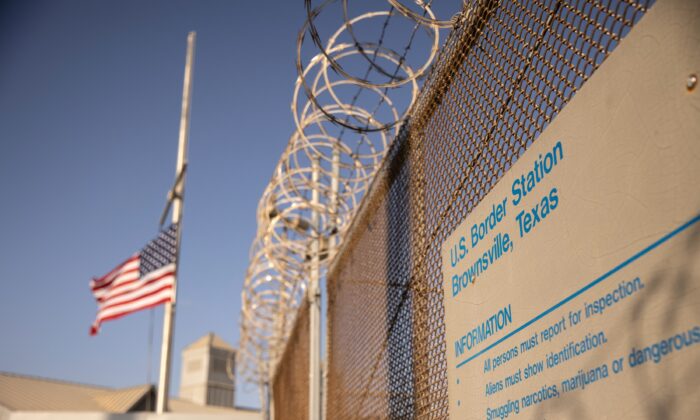 The U.S. flag flies at half staff at a port of entry at the U.S.-Mexico border in Brownsville, Texas, on Feb. 24, 2021. (John Moore/Getty Images)
Immigration & Border Security

The states of Texas and Missouri filed a motion on Thursday seeking a court order to force the Biden administration to reinstate the Migrant Protection Protocols (MPP) program, accusing the administration of having ignored the Supreme Court’s order last month to do so.

The motion (pdf) filed late Thursday accuses the administration of having stalled in its efforts to enforce the MPP program.

“The Biden Administration’s refusal to follow the law has created chaos at our border. Our officers are working endlessly to try to manage the crisis that is overwhelming our state,” Texas Attorney General Ken Paxton said in a statement.

The policy, also commonly known as “Remain in Mexico,” requires some people seeking asylum to stay in Mexico while they await immigration proceedings in the United States.

The program was launched in January 2019 under the Trump administration. Mark Morgan, who was acting commissioner of Customs and Border Protection at the time, told The Epoch Times that the MPP was “​​the most significant game-changer” and largely responsible for a 75 percent drop in illegal crossings.

President Joe Biden had ordered the MPP program to be suspended in January, on his first day in office.

Texas and Missouri subsequently sued the administration, culminating in a Supreme Court order in August that declined to intervene in stopping an injunction ordering the Biden administration to reinstate the MPP program.

“I have already sued this administration and won—yet they still think they are above the law and can continue shirking their responsibilities,” Paxton said in his statement. “It’s time to stop the Biden Administration from acting outside of federal law. They have created this crisis by inviting illegal aliens to come into our country unlawfully.”

Missouri Attorney General Eric Schmitt said in a statement: “If the Biden Admin won’t act to secure the border, we will.”

The Biden administration earlier this week asked a federal appeals court to lift the injunction, ordered by U.S. District Judge Matthew Kacsmaryk, a Trump appointee. According to Bloomberg, the Justice Department said in a court filing on Sept. 20 that the injunction “threatens to profoundly disrupt the government’s management of border security and foreign policy—two areas that the Supreme Court has recognized are committed to the discretion of the executive branch.”

The latest motion from Texas and Missouri argued that the administration does not need an agreement with Mexico, nor need to wait to rebuild facilities, in order to start reimplementing the MPP program.

Texas and Missouri also argued that the administration cannot justify its delay in implementing the MPP by saying it needs additional time “to implement COVID-19 protocols and account for the operation of the Title 42 rapid-expulsion program.”