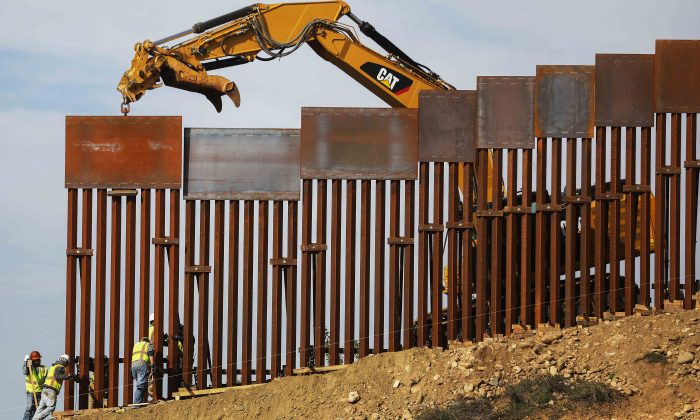 The attorneys general of Texas and Missouri teamed up to sue the Biden administration on Thursday, seeking to resume construction of the wall at the U.S.-Mexico border.

They argue that the president’s refusal to use the more than $1.3 billion appropriated for “construction of barrier system along the southwest border” is a violation of the separation of powers and the Take Care clause of the Constitution.

“[It] is arbitrary and capricious, and fails to spend appropriations mandated by the Consolidated Appropriations Act of 2020 and 2021,” the attorneys general, both Republicans, said in a news release.

“Time and again, the Biden administration has refused to take concrete action to quell the worsening border crisis, inviting the cartels and human drug smugglers to take advantage of our porous border,” Schmitt said in a statement. “Without a border wall, illegal immigrants, coyotes, and bad actors can simply march across our southern border and into the interior. The border wall needs to be built, the funds have been appropriated to continue to build the wall, and yet the Biden Administration outright refuses to do so.”

Schmitt noted that the same amount of funds was also appropriated by the FY2021 DHS Appropriations Act.

“The Biden Administration’s flat refusal to use funds that have already been set aside by Congress to build the border wall is not only illegal and unconstitutional. It’s also wrong, and it leaves states like Texas and Missouri footing the bill,” Paxton said in a statement.

He added, ”I will not sit idly by while this Administration wreaks more havoc on our state.”

The Epoch Times has contacted the White House and DHS for comment.

In issuing an order suspending border wall construction—a project that has been long championed by Trump—Biden described it as wasteful and ineffective, although DHS has spent funds on repairing some areas along already-built wall sections.

The Biden administration in recent weeks has faced mounting criticism for its handling of border security and a surge in illegal immigration along the southern border.

Late last month, thousands of illegal aliens of Haitian origin created a makeshift encampment underneath a bridge in Del Rio, Texas. Later, Mayorkas said that about 12,000 of the Haitians were released into the interior United States with pending court dates.

The crisis triggered calls from Republicans and even some Democrats to restart the construction of the border wall, which was a major campaign promise of Trump’s during his 2016 presidential campaign.

Biden’s pick to lead Customs and Border Protection (CBP), Chris Magnus, acknowledged during his confirmation hearing on Tuesday that the influx of illegal immigration at the southern border is an urgent matter.