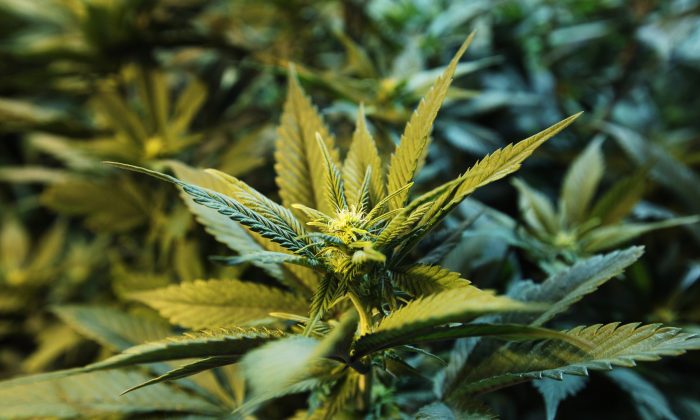 FILE - This Nov. 7, 2012 file photo shows a medical marijuana plant at a dispensary in Seattle. Tied to an unpopular president and his signature health care law, Democrats in the nation’s largest swing-state see the prospect of legal medical marijuana as a rare source of hope and high voter turnout in this year’s midterm elections. (AP Photo/Ted S. Warren, File)
US

An article saying Texas has approved the usage of medicinal and recreational marijuana is fake.

It was posted on NewsBuzzDaily, one of many fake news websites that publish articles to trick people into sharing them.

It reads: “Texas Governor Rick Perry will be signing a new bill into law, legalizing medicinal and recreational use of marijuana for adults ages 21 or older. Bill HB 2412 will go into effect January 1, 2015. Texas is the first southern state to legalize any recreational drug. The state of Texas is expected to profit $50 million in tax revenue from marijuana sales. A state tax of 11% will be implemented on sales. In addition to the profit in tax revenue, with the legalization of the drug Texas is expected add more than 5,000 job openings ranging from farmers to dispensary agents.”

At the bottom of the page, however, it says that “NewsBuzzDaily.com is a combination of real shocking news and satire news. Please note that articles written on this site are for entertainment and satirical purposes only.”

There’s no legitimate local or national media coverage about Texas approving marijuana use.

The bogus article had tens of thousands of “likes” and shares on Facebook.

And meanwhile, a number of people apparently believed it.

“Medical & Recreational Marijuana legalization in Texas!! signed this week, set for 2015! Say What!?” said one person on Twitter.

Added another: “Texas is legalizing medical marijuana next year.”

“Soon afterwards links and excerpts referencing this item were being circulated via social media, with many of those who encountered it mistaking it for a genuine news article. However, Texas has no bill to legalize any form of marijuana use pending in its legislature; the last bill numbered HB 2412 presented to that body was on a completely different subject. This article was just a spoof from NewsBuzzDaily, a fake news web site whose stock in trade is publishing fantastically fictional stories,” says hoax-debunking website Snopes.com.