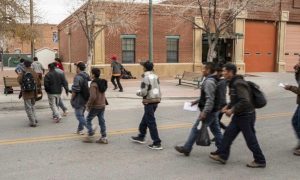 ICE Releases Hundreds of Migrants Into Texas and New Mexico, With More Expected
0 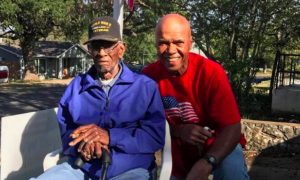 Tony Dwayne Albert II was arrested in Seguin, Texas, for carrying a loaded handgun and possessing marijuana on Dec. 30, 2018. This photo is from 2017. (Texas Department of Public Safety)
Crime and Incidents

A man in Texas apprehended wearing a mask and armed with a loaded gun was on his way to a church to “fulfill what he called a prophecy,” the local police department stated.

Officials said they aren’t sure what church Tony Dwayne Albert II was headed to when he was arrested on Dec. 30.

Police officers, acting on a tip, rushed to West Kingsbury Street in Seguin and found Albert wearing a surgical face shield and tactical-style clothing and carrying a loaded gun and extra ammunition.

Albert told the first officer that arrived on the scene that he was headed to the church to fulfill a prophecy, the Seguin Police Department stated.

A waitress at a nearby restaurant said that Albert approached the establishment and entered, wearing the mask and sunglasses. He went into the restroom for a spell and she smelled smoke.

When he came back out, his actions raised an alarm.

“(Albert) was looking at me and he was saying something about, ‘Do you know where the nearest church is at?'” Las Mananitas Mexican Restaurant waitress Brianna Jimenez told KSAT. “And he said Baptist church.”

She pointed to the Door Christian Fellowship Church that is directly next to the restaurant.

“He was like, ‘I’ve been to that church many years ago,'” Jimenez said. “I just said, ‘Oh, OK,’ and then he was like, ‘Do you know where the other Baptist church is at?'”

When he finally walked out the door after extensive questioning on the location of Baptist churches in the area, Jimenez and her mother noticed he was gripping a gun. Her mother called the police.

The police department thanked the person who tipped off the police.

“We’re extremely grateful [for the person who called 911], and I know the citizens of Seguin are [grateful], regardless of if he thought he was somewhere else,” Seguin police spokeswoman Tanya Brown told KSAT. “[Albert] could have carried out a shooting, or he was capable of doing that because he had a loaded handgun.”

The FBI and the Bureau of Alcohol, Firearms, and Explosives are assisting the Seguin police with the investigation.

“There were more than 1.2 million violent crimes reported to UCR [Uniform Crime Reports] nationwide in 2017. There was a 0.7 percent decrease in murders and a 4 percent decrease in robberies from 2016 to 2017. Aggravated assaults increased 1 percent in 2017. The FBI began collecting data solely on an updated rape definition last year, and 135,755 rapes were reported to law enforcement in 2017,” the FBI stated.

“The report also showed there were more than 7.7 million property crimes last year. Burglaries decreased 7.6 percent and larceny-thefts decreased 2.2 percent. Motor vehicle thefts increased 0.8 percent from 2016 to 2017.” These figures were compiled from more than 13,000 law enforcement agencies around the United States that submitted their crime data to the FBI.