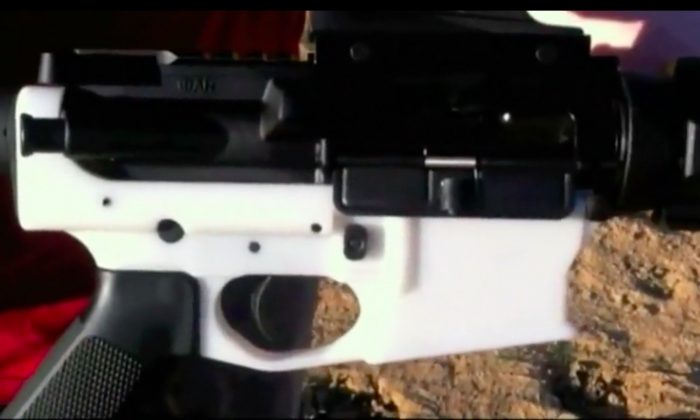 An AR-15 created from a 3-D printer. (Courtesy of Defense Distributed via Reuters)
US News

GRAND PRAIRIE, Texas—A Texas man has been sentenced to eight years in federal prison after police found him in the woods with a partially 3-D printed AR-15 rifle and a list of federal lawmakers’ addresses in his backpack.

Eric McGinnis was convicted last summer of possessing an unregistered short-barreled rifle. He also was found guilty of unlawfully possessing ammunition while subject to an active protective order that had been issued because of a 2015 altercation with a girlfriend.

You can not make a viable gun out of plastic.
Eric Gerard McGinnis, 43, was sentenced to 8 years in prison for “3-D printing” an AR-15. pic.twitter.com/AAztu6WkVY

McGinnis, who was sentenced on Wednesday, Feb. 13, tried to buy a semiautomatic rifle in 2016 but was turned away because of the protective order, prosecutors said. According to the Dallas Morning News, McGinnis instead used a 3-D printer to create the firing mechanism for an AR-15.

Investigators said McGinnis admitted in a jailhouse phone call to a family member that he’d printed part of the gun.

“I didn’t buy a gun, I built the gun,” he said in the recorded phone call, according to prosecutors. “The upper, I printed a lower, and I built it—installed the trigger and did all that stuff. I built it.”

“I didn’t buy a gun, I built a gun… The upper, I printed a lower, and I built it. Installed the trigger and did all that stuff. I built it.”
– Eric McGinnis, in a jailhouse phone call to a family member https://t.co/NHHSxKsvVK #3Dgun pic.twitter.com/fuQ6oThgkG

McGinnis’ attorneys argued that McGinnis should not have lost his right to own guns because of the protective order.

When McGinnis was arrested in July 2017, police found a list labeled “9/11/2001 list of American Terrorists.” Investigators said the list included addresses of both Democratic and Republican lawmakers.

Prosecutors said Wednesday that they believe McGinnis had an interest in James Hodgkinson, the man who shot several Republican lawmakers at a congressional baseball practice in Virginia in June 2017.

Eric McGinnis was sentenced yesterday to 8 years in prison after officers caught him with a partially 3D-printed AR-15 rifle and a list of lawmakers’ addresses in his backpack, despite a court order that prohibited him from possessing a firearm: https://t.co/cL6vynx2gu pic.twitter.com/eSCbhuspkh

Since about 2010, the State Department has been working with the Department of Defense and the Commerce Department to update its list, formulated in the 1970s, of weapons that it bans for export under the International Traffic in Arms Regulations (ITAR).

In defending the State Department’s settlement, Nauert said the real issue that politicians and law enforcement officials have been protesting is a domestic and not a State Department issue.

“I think ultimately what this gets down to is a domestic case where it’s a domestic gun control issue that needs to be addressed, not just by Congress but by law enforcement,” she said. “I imagine there will be many conversations held here at the federal level… about the next steps.”

President Trump weighed in on the debate, saying in a tweet on July 31 that he is reviewing laws on the issue. “Already spoke to NRA, doesn’t seem to make much sense!” he wrote.

I am looking into 3-D Plastic Guns being sold to the public. Already spoke to NRA, doesn’t seem to make much sense!

His deputy press secretary, Hogan Gidley, told reporters later in response to questions about the president’s tweet that the president cares about the safety of Americans and “considers this his highest responsibility.”

“In the United States, it is currently illegal to own or make a wholly plastic gun of any kind—including those made on a 3D printer,” he said on July 31. “The administration supports this nearly two-decade-old law. We will continue to look at all options available to us to do what is necessary to protect Americans, while also supporting the First and Second amendments.”

The other issue critics have raised about the distribution of 3-D-printed guns is that they are “undetectable,” meaning they cannot be picked up by a metal detector.

While the majority of the gun is plastic, a small portion of it is metal.

The National Rifle Association (NRA) hasn’t taken a stance on the issue, but said in a statement that these guns are only legal because they are detectable.

“Undetectable plastic guns have been illegal for 30 years,” the pro-gun lobby group said in a statement. “Federal law passed in 1988, crafted with the NRA’s support, makes it unlawful to manufacture, import, sell, ship, deliver, possess, transfer, or receive an undetectable firearm.”

Pro-gun advocates have argued that these weapons are not going to become ubiquitous overnight because of the high cost of printers required to manufacture them. That doesn’t seem to reassure opponents of such weapons, who point out that if the guns get in the hands of just one bad actor, they could potentially be deadly.

The other issue opponents see with the guns is that people can get them without background checks and they don’t have serial numbers, meaning they cannot be tracked.

Dave Workman, a senior editor for monthly magazine TheGunMag, owned by the Second Amendment Foundation, argues that criminals don’t obey gun laws as it is, and that if someone is bent on getting a gun for illicit means, background checks and serial numbers are not going to stop them.

“What criminal is going to spend a whole bunch of money to buy a machine to print a 3-D gun that fires a single shot when they could actually go out and steal one, even from a police officer, that fires multiple shots and isn’t going to cost him any money,” he said in a phone interview. “We’re talking about pure economics here.”

After the judge’s order, Wilson agreed to take the CAD files down till September.

The Epoch Times reporter Holly Kellum contributed to this report.