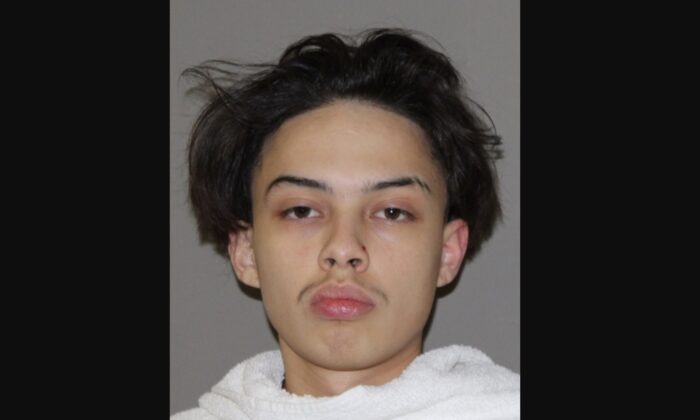 Mugshot of suspect Mikeal Deshawn Archambault of The Colony, Texas. Archambault was charged in June 2022 with making a terrorist threat against the U.S. Supreme Court. (Denton County Jail)
Crime and Incidents

A Texas man was arrested and charged in connection with a terrorist threat he allegedly made against the Supreme Court on social media hours after the court overturned the 1973 abortion precedent Roe v. Wade.

Mikeal Deshawn Archambault, 20, of The Colony, a suburb of Dallas in Denton County, Texas, allegedly posted on Twitter: “I’m finna kill everyone in the SUPREME COURT with my ak47[.]”

The post at the account @moseswrld was time-stamped late June 24, hours after the Supreme Court voted to overturn Roe v. Wade in the Mississippi abortion law case, Dobbs v. Jackson Women’s Health Organization. The post quickly went viral but the account has since been deleted.

Archambault was booked into the Denton County Jail on June 25. Records show he was released the next day on a $25,000 surety bond.

The Colony Police Department said in a July 1 statement that it was contacted June 24 “by the FBI regarding online threats of violence towards The Supreme Court.” Police searched the suspect’s residence but didn’t initially locate him.

“In conjunction with the FBI, Detectives from The Colony Police Department’s Criminal Investigative Division conducted an investigation and obtained probable cause for an arrest warrant. Officers went back to the subject’s residence, located the subject and placed him under arrest for Terroristic Threat,” according to the statement.

The charge against Archambault came as threats related to controversial Supreme Court decisions have ramped up in recent weeks.

The justices themselves have been personally threatened.

Supreme Court Marshal Gail Curley has accused Maryland authorities of not doing enough to protect the justices and of not enforcing anti-residential picketing laws to halt the boisterous protests at their homes.

Although Republican Maryland Gov. Larry Hogan has pushed back against Curley, Hogan and Republican Virginia Gov. Glenn Youngkin have both called on the U.S. Department of Justice to do more to protect the court’s members.

According to the FBI, Roske said he wanted to kill Kavanaugh to prevent him from voting to overturn abortion rights and gun control laws. A federal grand jury in Maryland indicted him on June 15. He entered a plea of not guilty.

A group calling itself Jane’s Revenge has declared “open season” on pregnancy counseling centers across the nation. It has claimed credit for a series of violent recent attacks on the pro-life centers.