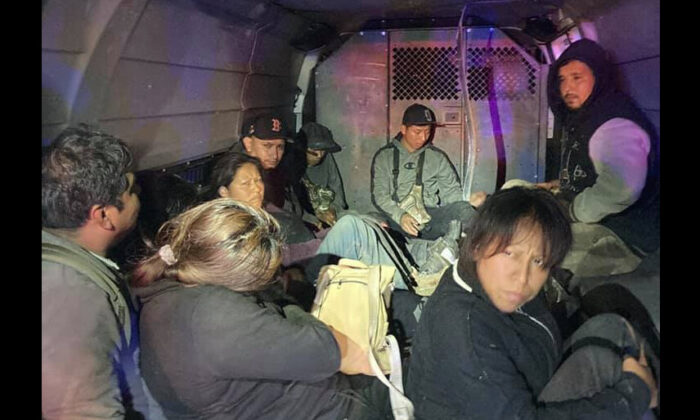 A new law in Texas has removed a major barrier to prosecuting human smugglers, who are most often caught driving illegal aliens from the U.S.–Mexico border to larger cities.

As of Sept. 1, prosecutors need not prove “pecuniary gain,” which was often the reason cases were thrown out.

“We don’t have any way to track cases declined for particular issues, but there were a noticeable number,” Suzanne West, district attorney based in the border city of Val Verde, Texas, told The Epoch Times. “The changes … absolutely do make these cases easier to prosecute.”

Pecuniary gain is the money, or benefit, a driver is paid to smuggle illegal aliens from one place to another. To prove it requires a confession on most occasions, and often a defendant will simply say they were giving the passengers a lift for free.

In reality, cartels recruit smugglers through social media websites and messaging apps promising thousands of dollars for transporting illegal aliens. The drivers tend to be a mix of U.S. citizens and illegal aliens.

Smuggling of humans is a third degree felony offense, punishable by up to two years in prison and a fine of up to $2,000 per person being smuggled. The new law raises the degree of felony if pecuniary gain is proven, if a smuggled person is a minor, or if the smuggler has a firearm.

The law also adds a felony charge to anyone who “assists, guides, or directs two or more individuals to enter or remain on agricultural land without the effective consent of the owner.”

Texas state Sen. Juan Hinojosa, who sponsored the bill before it became law, represents the Rio Grande Valley, one of the main hubs for human smuggling in Texas.

“There is no doubt that we have a critical situation at the state’s southern border and I have heard firsthand the difficulties that human smuggling brings to local officials and landowners,” Hinojosa said in a June statement.

The state’s Senate Research Center, in its bill analysis, stated that local authorities, law enforcement agencies, and landowners had expressed concern that the current penalties for human smuggling were “inadequate.”

Since President Joe Biden took office, illegal border crossings have hit record-breaking numbers and have increased every month. Border Patrol agents have apprehended more than a million illegal aliens along the southern border since February.

Agents have expressed concern over the unknown number of illegal aliens who have evaded apprehension and are loose in the country.

Texas has been hit by a deluge of border-related issues this year, including a spike in vehicle pursuits and bailouts (which is when a driver slows down or stops and everyone jumps out of the vehicle and scatters to avoid capture).

As of Sept. 7, Kinney County Sheriff Brad Coe has 10 suspected smugglers in jail. He has dozens more arrest warrants sitting on his desk, waiting for jail space to free up so he can find and arrest them.

Many other rural counties have been grappling with the same issues, particularly a critical shortage in jail space.

“From those of us in the arena of border crime, we truly appreciate the assistance provided by all,” West said. She said any additional tools will be employed to protect communities “from crime and the ripple effects that large scale criminal operations trigger.”

In March, Texas Gov. Greg Abbott surged the state’s Department of Public Safety (DPS) resources to border regions. State troopers have since been involved in the apprehension of more than 11,000 illegal aliens, according to information obtained from DPS.

Officers have been involved in 694 vehicle pursuits since March, according to DPS statistics.