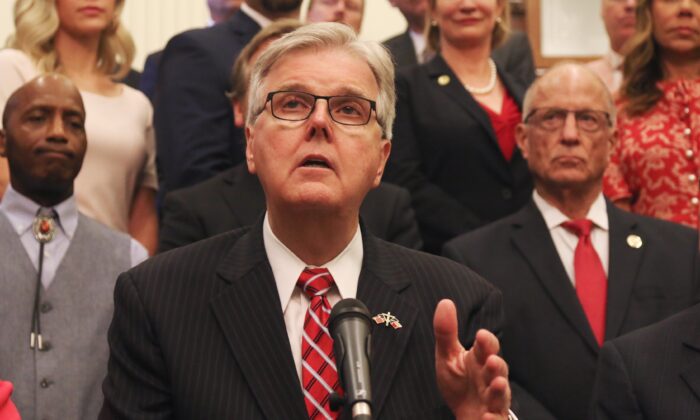 Texas Lt. Gov. Dan Patrick said he would like to end tenure for new hires at Texas’s public universities and colleges and revoke tenure for professors who teach critical race theory (CRT).

“What we will propose to do is end tenure, all tenure for all new hires,” Patrick, a Republican, said at a Feb. 18 press conference.

In Texas, public universities currently review tenured professors on a six-year basis. Patrick said he would like to change that to once per year and that “the law will change to say teaching critical race theory is prima facie evidence of good cause for tenure revocation.

“We are not going to allow a handful of professors to teach critical race theory; we aren’t going to allow it to happen,” he said. “We will change the rules and have tenure reviewed annually.”

The announcement is a response to a resolution overwhelmingly approved by the Faculty Council at the University of Texas–Austin to affirm the “fundamental rights” of professors to teach about race, “gender justice,” and CRT. Patrick dismissed their academic freedom argument, saying that professors can’t “hide behind” that concept to teach what’s discriminatory in nature.

While those measures didn’t specifically mention CRT by name, they ban the teaching of ideas such as that individuals of a certain race are inherently racist.

“What we said is that you’re not going to teach a theory that says, ‘We’re going to judge you when you walk into the classroom about the color of your skin, that if you’re white you were born a racist and that’s normal, not an aberration, and you’re an oppressor; and if you’re a person of color, you’re a victim,'” Patrick said.

His comments came after he criticized UT Austin professors who supported the teaching of CRT, and he vowed to make sure public funds wouldn’t be used to promote the Marxism-rooted ideology in college.

An outgrowth of Marxism, CRT interprets society through a Marxist dichotomy between “oppressor” and “oppressed,” but replaces the class categories with racial groups. Proponents of CRT see deeply embedded racism in all aspects of U.S. society and demand the implementation of “anti-racist” policies, such as race-based redistribution of wealth and power along the perceived lines of “racial inequity.”