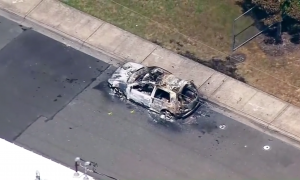 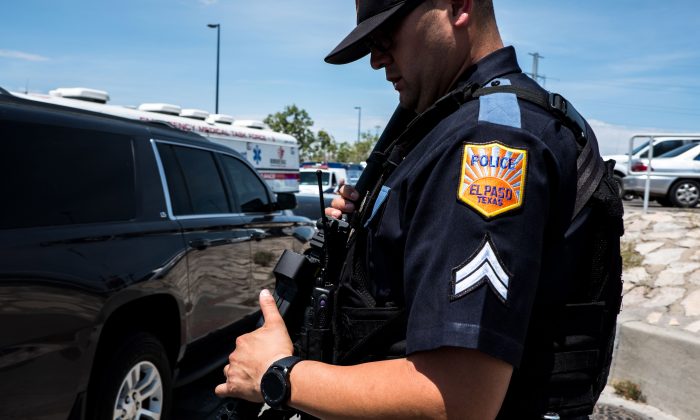 A law enforcement officer near the Walmart in El Paso, Texas where a mass shooting left over 20 people dead or wounded on Aug. 3, 2019. (Joel Angel Juarez/AFP/Getty Images)
US News

Texas Lt. Gov. Dan Patrick said that the far-left extremist Antifa group should stay away from Texas in the wake of a mass shooting at an El Paso Walmart on Aug. 3.

“Clear message to Antifa: stay out of El Paso,” Patrick said. “Stay out of Texas, basically. We don’t need them coming in on Sept. 1. We didn’t need them to begin with before this happened. But I would say to Antifa, scratch Texas off your map.”

Patrick said he saw a story about Antifa planning to go to Texas, prompting his remarks.

Patrick, speaking to Fox News, was addressing a plan by extremists to conduct a “Border Resistance” militant action in the border city on Sept. 1 after events in cities across the Midwest and West.

“It is not the time or place for them to come in anytime, but particularly in the aftermath of what just happened in El Paso,” Patrick added.

Awareness of the summer events came from journalist Andy Ngo, who shared pictures of the planned tour and claimed they were tied to Antifa.

The events were taking place in Santa Cruz, Oakland, Olympia, Portland, Seattle, Minneapolis, and Chicago leading up to the “Meet me in Texas” event in El Paso, which was slated to start on Sept. 1 and unfold over the following nine days. The events started in late July.

The event’s website says: “We are calling on affinity groups everywhere to come together and help us address US-funded genocide and local concentration camps.”

One of the organizers of the event, Hecate Society, has set up a gofundme page to collect donations. They wrote that if you donate more than $10 to them, they will send you a button, which may include one with the Antifa logo that says “Antifa International.”

Another webpage promoting the event states: “It’s Going Down is a digital community center for anarchist, anti-fascist, autonomous anti-capitalist and anti-colonial movements. Our mission is to provide a resilient platform to publicize and promote revolutionary theory and action.”

The webpage includes video footage of their past events where they are holding an Antifa flag.

Groups involved in the events included Tornillo the Occupation, which occupied and vandalized a U.S. Border Patrol Musem near El Paso earlier this year, and Abolish ICE SF, which seeks to abolish the Immigration and Customs Enforcement agency.

Ngo was assaulted in broad daylight last month in Portland by about eight Antifa members. Another Antifa member, armed with a rifle, went to an immigration detention facility in Washington state on July 13 and threw firebombs at vehicles before attempting to blow up a propane tank. He was shot dead.

Antifa is leading a “Border Resistance” militancy training tour that will converge on a 10-day siege in El Paso, TX. The promotional image shows border enforcement officers being killed & government property fired bombed. Organizers asking for “white comrades” to pay for others. pic.twitter.com/zwG7iMLMZT

Extremists glorified the terrorist, calling him a hero and a martyr.

Antifa’s activities have increasingly been on the radar of lawmakers and others. Republican Senators introduced a bill on July 18 that would label Antifa a domestic terror group, a day after Trump criticized Antifa at a North Carolina rally.

He described how Ngo was unarmed and beaten and how Antifa members typically wear masks to obscure their faces so they can get away with criminal activity. The next week, Trump said he might declare Antifa “a major organization of terror.”

A video shared by Ngo on Friday showed a masked Antifa member chasing an activist down the street in Portland during Antifa’s training day there recently.

The moment a masked antifa person chased a man down the street with a knife was captured on a livestream by right-wing activist Haley Adams. Antifa had come together to patrol the street where the Portland “Border Resistance” training was happening. pic.twitter.com/nXyQlaIZrU

According to the website Ngo posted, “Local and national organizers are working together to build 10 days of trainings and direct actions for the Border Resistance Convergence in El Paso, TX – September 1-10th.”

“We are calling on affinity groups everywhere to come together and help us address US-funded genocide and local concentration camps,” the website added, using language popularized by Rep. Alexandria Ocasio-Cortez (D-N.Y.) to describe immigration detention facilities.

The Washington Antifa terrorist used the term multiple times in his manifesto.

Few other details about planned activities were available on the Border Resistance website.

Update: This article has been updated to reflect that the organizers of the group have not identified themselves as Antifa.