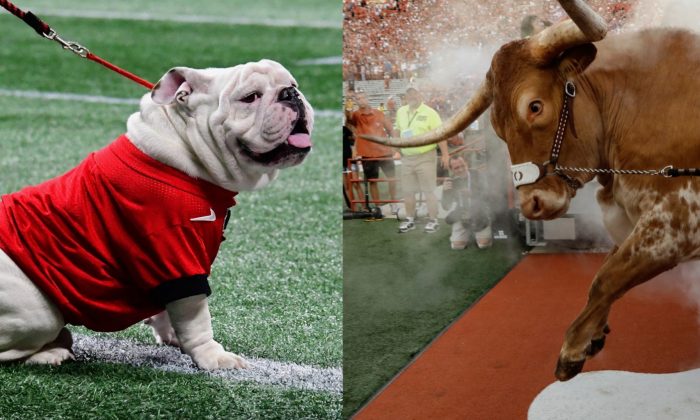 Tensions rose at the first Sugar Bowl game of the year after live mascots from the Texas Longhorns and Georgia Bulldogs faced off. In a tense pregame meeting, Texas steer mascot Bevo XV aggressively charged down Georgia canine mascot Uga X who responded by retreating back into his territory.

Handlers for the mascots had tried to position them for a photo opportunity but Bevo rapidly moved towards Uga, sporting a bright red Georgia sweater, knocking down metal barriers and creating a moment of panic.

“We were trying to turn him around to take a picture, and he made a run for it,” Patrick McDowell, one of Bevo’s handlers told ESPN. “He was just going to say hi.”

OMG this angle of Bevo and Uga pic.twitter.com/ez4aub88Ij

Whether or not Bevo was just trying to “say hi,” the incident caused a flurry as photographers made a run for it, with some almost being trampled. There were no reported injuries.

The incident occurred about an hour before kickoff.

Bevo is not here for this mascot meeting. #HookEm pic.twitter.com/KXgaQzGm0W

As soon as the chaos began, Dowell and the rest of Bevo’s handlers quickly corralled the 1,600-pound steer and secured him. Once the situation calmed down, the photo opportunity went smoothly with Bevo staying in his original position, facing the stands according to ESPN.

“He’s as docile as a lamb,” said John Baker, owner of Sunrise Ranch, where Bevo was bred. “That’s the first time he’s done that this year.”

Bevo, who turns 4 this month, is in his third season with Texas according to Baker. “He’s a healthy and happy Bevo,” he said.

Meanwhile, 62-pound English bulldog Uga, 5, emerged unscathed. Mascot handler Charles Seiler said Uga was not too afraid of Bevo as he has spent time on a cotton farm with three other steers.

The bulldog took timely precaution. He’s in his fourth year with the Georgia team, his owner said.

Media reports described the scuffle as a lively way to start the match, the first between the two teams since the 1984 Cotton Bowl, according to Sports Day.

The scuffle was caught on video and quickly went viral on social media. Some fans believe it foreshadowed results of the match, with Texas beating Georgia 28 to 21.

While many found it amusing, some did not. One animal welfare organization denounced the incident.

The People for the Ethical Treatment of Animals (PETA), the world’s largest animal rights organization, with more than 6.5 million members and supporters, pleaded on Dec. 2 for both universities of Texas and Georgia to stop using live mascots at future games.

According to their website, PETA focuses its attention on the four areas in which the largest numbers of animals suffer the most intensely for the longest periods of time: in labs, the food industry, clothing trade, and the entertainment industry.

So … @peta is calling for Bevo and Uga to retire after the Texas and Georgia mascots got into a little dust up before the Sugar Bowl.

Seriously, this is a real life press release. pic.twitter.com/dpK2Ogbg4n

“It’s indefensible to subject animals to the stress of being packed up, carted from state to state, and paraded in front of a stadium full of screaming fans,” PETA Senior Vice President Lisa Lange said in a written statement. “It’s no surprise that a skittish steer would react to a perceived threat by charging, and PETA is calling on the University of Texas and the University of Georgia to learn from this dangerous incident, retire their live-animal mascots, and stick to the talented consumed mascots who can lead cheers, react to the crowd, and pump up the team.”

No university representatives commented on PETA’s request but media reports speculate Bevo and Uga will not be leaving anytime soon, according to Sports Day.