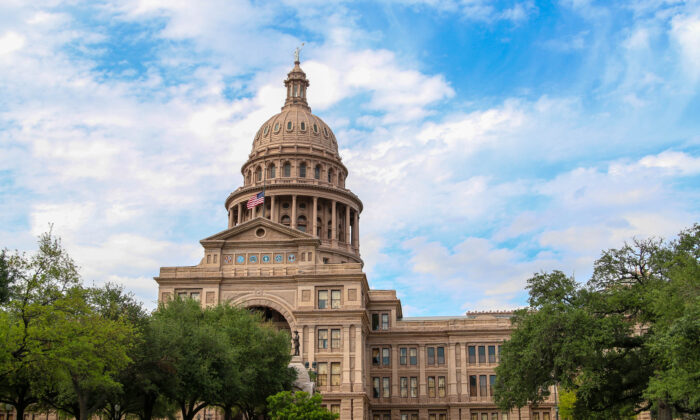 Texas Republican lawmakers on Tuesday authorized tracking down and arresting if necessary over 50 House Democrats who fled Monday’s special session for Washington, D.C., seeking to block passage of a sweeping election reforms bill.

“Members, the sergeant-at-arms and the officers appointed by him are directed to send for all absentees whose attendance is not excused for the purpose of securing and maintaining their attendance—under warrant of arrest, if necessary,” Texas House Speaker Dade Phelan, a Republican, said from the floor. “Any member who wishes to leave the hall must have the written permission of the Speaker of the House.”

Of the 67 House Democrats, 63 were absent at Monday’s special legislative session, denying Republicans the quorum they needed for the bill to pass. A number of Democrats reportedly had left the state in private jets bound for Washington.

The remaining lawmakers voted 76-4 along party lines to direct state law enforcement to find and return absent Democrats so they can fulfill their legislative duties.

“As soon as they come back [to] the state of Texas, they will be arrested, they will be cabined inside the Texas Capitol until they get their job done,” said Texas Governor Greg Abbott. “Everybody who has a job should show up to do that job.”

On Tuesday, members of the Texas House Democratic Caucus stood in front of the nation’s capitol singing, “We will overcome someday,” with some decrying the Republican legislation as “retrogression.”

The bill proposes, among other things, new ID requirements for absentee ballots and a ban on drive-through 24-hour voting.

In addition, the legislation seeks to strengthen the role of partisan poll watchers and prohibit unsolicited mailing of ballot applications unless requested by voters.

Many Democrats have argued that the bill would make it harder for young people, people of color, and disabled people to vote.

Texas state Rep. Sefronia Thompson, speaking before a group of fellow Democrats in Washington on Tuesday, likened her situation to being held hostage by Republicans.