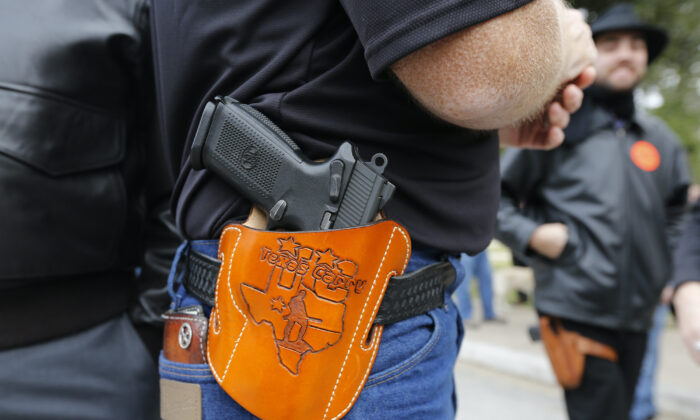 A federal court in Texas on Thursday struck down a ban on 18-to-21-year-olds carrying a handgun outside the home, ruling it violated the constitutional right to keep and bear arms for self-defense.

The lawsuit was brought by two adult plaintiffs within that age group and the Firearms Policy Coalition, Inc.

The ban prevented the plaintiffs from carrying a handgun for self-defense in Parker, Fannin, and Grayson Counties, where they live, work, and study, the lawsuit states.

According to court documents, the ban put them in “danger of sustaining a direct injury as a result of the statute’s operation or enforcement” by virtue of complying with the law.

“To the extent that Texas’s statutory scheme … prohibits law-abiding 18-to-20-year-olds from carrying handguns for self-defense outside the home based solely on their age, this statutory scheme violates the Second Amendment, as incorporated against the States via the Fourteenth Amendment,” Pittman said in his ruling (pdf).

Further, the Second and the Fourteenth Amendments “protect an individual’s right to carry a handgun for self-defense outside the home.”

The lawsuit was first filed by the Firearms Policy Coalition in November last year.

In September 2021, Texas made it legal for most adults over 21 to carry a handgun in a holster without a permit, both openly or concealed. That law, HB1927, modified the 2016 open carry law, which included the requirement of having a license to carry.

Under that law, the only 18-to-21-year-olds who were permitted to carry a handgun outside the home for self-defense were military personnel, honorably discharged veterans, and persons protected by a protective order under either the Texas Family Code or the Texas Code of Criminal Procedure.

“Simply stated, although Texans over the age of 21 can carry a handgun (either openly or concealed) outside the home (with or without a license), law-abiding 18-to-20-year-olds Texans are prohibited from carrying a handgun for self-defense outside the home,” Pittman noted in his ruling.