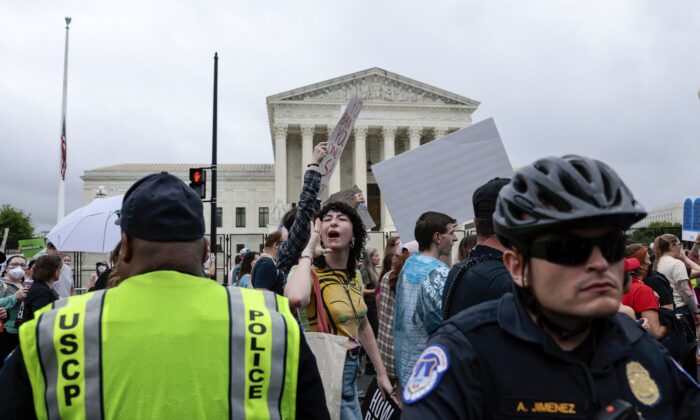 Police keep watch as pro-abortion protesters march in front of the U.S. Supreme Court during a Bans Off Our Bodies march in Washington on May 14, 2022. (Anna Moneymaker/Getty Images)
Texas

Abortions can temporarily resume in Texas after a judge on Tuesday blocked officials from enforcing a law passed nearly a century ago that the state attorney general said is now back in effect following the Supreme Court’s decision last week.

Judge Christine Weems in Harris County issued a temporary injunction following a last-ditch lawsuit filed by pro-abortion groups to resume services after the nation’s highest court struck down the 1973 Roe v. Wade ruling that argued women have a constitutional right to obtain abortions.

The order allows clinics to resume services, for now, in a state where abortion was already restricted to only up to six weeks of pregnancy under a Texas law that took effect in September. A later hearing is scheduled for July 12.

Other than Texas, about a dozen other states have trigger laws that either ban abortions entirely or severely restrict when they can be performed. Texas’s trigger law is slated to go into effect later in the summer after the Supreme Court’s judgment is officially released, which is a separate order from the one that was issued on June 24.

After the Supreme Court opinion was handed down, Republican Texas Attorney General Ken Paxton issued an advisory that “abortion providers could be criminally liable for providing abortions starting today” based on Texas’s “abortion prohibitions predating Roe.”

The law Paxton was referring to was issued in 1925, although last year, the Texas Legislature passed a bill—the Texas Heartbeat Act—that was signed into law that authorizes members of the public to file lawsuits against anyone who performs or facilitates an illegal abortion. An abortion can be deemed illegal in the state once embryonic or fetal cardiac activity is detected, which occurs normally after about six weeks.

One of the groups that filed a lawsuit, the Center for Reproductive Rights, issued a statement Tuesday after the judge’s order.

“This decision will allow abortion services to resume at many clinics across the state” because “every hour that abortion is accessible in Texas is a victory,” Marc Hearron, senior counsel with the left-wing group, said in a statement.

Judges in Louisiana and Utah on Monday also temporarily blocked trigger law bans on abortion in those states, respectively.

Trigger laws are also being challenged in Idaho, Kentucky, Arizona, and Mississippi courts.

Paxton’s office has not responded to a request for comment. The Texas attorney general has not issued a public statement following Weems’s order on Tuesday.