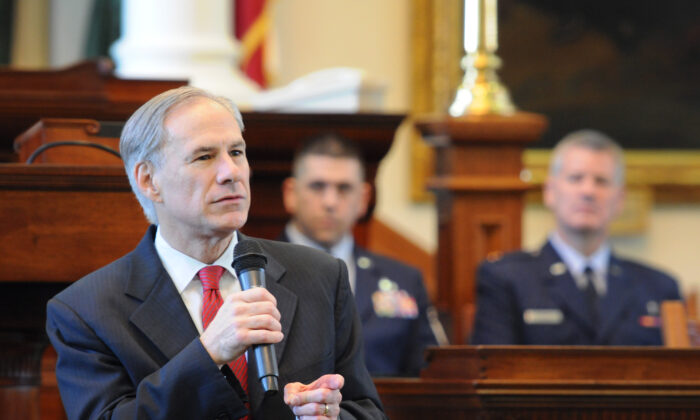 Texas became the first state to opt out of receiving refugees in fiscal year 2020 under a new initiative that gives U.S. states and counties more autonomy in refugee resettlement.

“Texas is one of the most welcoming states for refugees seeking to escape dangers abroad,” Texas Gov. Greg Abbott wrote in a Jan. 10 letter to Secretary of State Mike Pompeo. “In addition to accepting refugees all these years, Texas has been left by Congress to deal with disproportionate migration issues resulting from a broken federal immigration system.”

Abbott said Texas has resettled about 10 percent of all refugees entering the United States over the past 10 years, and also dealt with a disproportionate number of illegal immigrants who cross into the border state.

“At this time, the state and non-profit organizations have a responsibility to dedicate available resources to those who are already here, including refugees, migrants, and the homeless,” Abbott wrote. “This decision does not deny any refugee access to the United States. Nor does it preclude a refugee from later coming to Texas after initially settling in another state.”

It’s unclear how Abbott’s decision will affect Texas’s Bexar County, which had already opted into the refugee program in November, according to a letter sent to Pompeo by County Judge Nelson Wolff.

“Refugees are resilient, hard workers whose innovative skills have contributed greatly to our state,” Wolff wrote. “They have opened businesses, revitalized towns, and are productive members of our community.”

In September 2019, President Donald Trump issued an executive order that gave states and counties the power to opt in or out of accepting refugees in their locales.

Before that, the State Department would assign each refugee to a sponsor—one of nine nonprofit resettlement agencies—which would then determine placement of that refugee.

A resettlement agency receives a one-time payment per refugee to assist with expenses during a refugee’s first three months in the United States, according to the State Department.

“Texas has a long and proud history of welcoming refugees,” he said in a statement on Jan. 10.

He said HIAS, along with Church World Service and Lutheran Immigration and Refugee Service, has filed a lawsuit to overturn Trump’s executive order and the administration’s “unlawful and immoral policies targeting refugees.”

Thirty-seven states, six counties, and nine cities have so far notified the State Department that they will take in refugees in fiscal year 2020, which began Oct. 1, 2019.

Two counties have so far opted out—Appomattox County in Virginia, and Beltrami County in Minnesota. While neither county has resettled refugees for several years, both county leaderships have said their county doesn’t have the budget to support refugee resettlement.

The administration has said the reduction will compensate for the hundreds of thousands of new asylum claims from illegal aliens, mostly from Central America, as well as the backlog of more than 1 million asylum-seekers who are already inside the United States and who are awaiting adjudication of their claims.

Currently, more than 1,000 refugees are being resettled each month, with 3,219 resettled in the final three months of 2019—96 percent of whom are from Afghanistan.

While refugees and asylees must meet the same criteria and are granted the same benefits, refugees must apply outside of the country, whereas asylees claim credible fear once inside the United States.

The general definition applies to an alien who has experienced past persecution or has a well-founded fear of persecution on account of race, religion, nationality, membership in a particular social group, or political opinion.

The Department of Health and Human Services (HHS) spent more than $96 billion on programs supporting or benefitting refugees between 2005 and 2014, according to White House data. HHS surveys show that 45 percent of refugees arriving between 2011 and 2015 were receiving cash assistance and 49 percent were receiving Medicaid.

Pompeo said the United States has welcomed almost 3.8 million refugees and asylees since 1980.

“Our support for displaced people also takes the form [of] humanitarian assistance, and in fiscal year 2019, the United States contributed nearly $9.3 billion to supporting crisis response globally, the largest contribution of any country in the world,” Pompeo said on Nov. 2, 2019.

The majority of the United States’ refugee aid goes to assisting refugees in the areas where they are concentrated after displacement, such as Bangladesh, Colombia, and Turkey, according to the State Department.