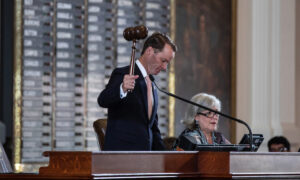 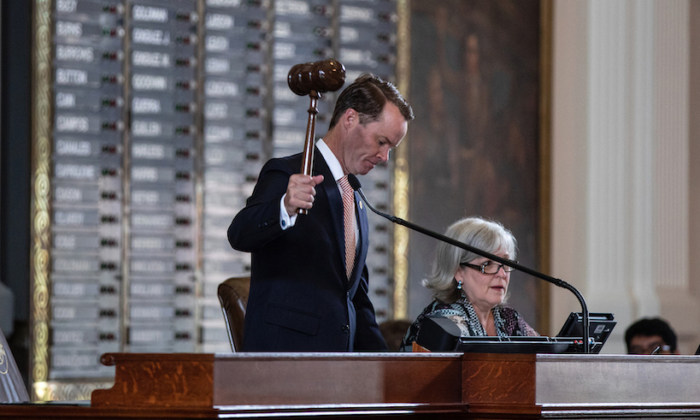 Texas Speaker of the House Dade Phelan gavels in the 87th Legislature's special session in the House chamber at the State Capitol in Austin, Texas, on July 8, 2021. (Tamir Kalifa/Getty Images)
US News

House Speaker Dade Phelan on Tuesday signed arrest warrants for the 52 state House Democrats who absented themselves from legislative business in order to block Republican-led election reforms, according to The Dallas Morning News.

Earlier in the day, the Texas House of Representatives voted 80-12 to bring back the wayward Democrats. Hours prior to the vote, the Texas Supreme Court ruled that the Republicans were within their rights to force their colleagues to return.

Phelan did not immediately return a request for comment by The Epoch Times.

The lone Republican who voted against approving the warrants, Rep. Lyle Larson, criticized the move on Twitter.

“Arresting members to come to the house floor. Have we got to the point where we believe our own [expletive] so much that we arrest our own colleagues. Civil discourse took a nasty turn today,” Larson wrote.

In a statement on Tuesday, after the Supreme Court ruling, the office of Texas Gov. Greg Abbott (R) claimed victory, saying “the Supreme Court of Texas swiftly rejected this dangerous attempt by Texas Democrats to undermine our Constitution and avoid doing the job they were elected to do.”

Democrats, in response, said they would attempt to fight for a temporary injunction at the district court level.

“It is no surprise that Republican Governor Greg Abbott and House Speaker Dade Phelan want to arrest their political opponents. Thankfully, this is still the United States of America. We will defend the freedom to vote, and we look forward to our temporary injunction hearing on August 20th,” Reps. Trey Martinez Fischer, Gina Hinojosa, and Jasmine Crockett said in a statement.

At least two dozen Democrats fled to Washington in an attempt to block the Republican-led election reform bill by running out the clock on a special session called by Abbott.

Last week, Abbott announced that he ordered another special legislative session for the month of August that’s intended to pass the voting overhaul bill, among other measures.

Unlike other states, which have rules that require a majority for a quorum to start a legislative session, Texas’ legislature requires a two-thirds super-majority.