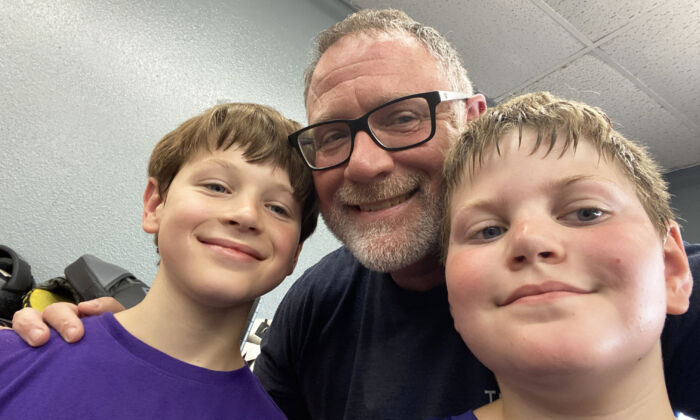 Amid ongoing controversy over the transitioning of gender dysphoric youth, Jeff Younger is taking a stand on how the state of Texas handles family law and gender reassignment surgeries.

His platform emerged after losing custody of his 9-year-old son, James, who is allegedly being socialized as a girl by his ex-wife Anne Georgulas, a pediatrician in Coppell, Texas.

James will be 10-years-old in May.

“It should absolutely not be allowed to transition children in the state of Texas,” Younger said. “That needs to be illegal.”

Younger is campaigning to be elected to the Texas House of Representatives to represent District 63 for Flower Mound, Lewisville, and portions of Denton County.

“The state has determined that it owns your child, and the state is going to do with the children whatever they want, and that’s why I’m running for office in House District 63,” he said.

“Part of my platform is to change how we deal with family law and to make significant changes to family law so that it’s very clear that parents are in control of their children’s lives even in divorce.

“Children don’t become wards of the state just because one parent wants a divorce.”

If elected Younger, who would replace Tan Parker, said his priority will be introducing legislation that outlaws gender-altering surgery for children, which Texas state Senator Bob Hall proposed last year in the form of Senate Bill 1311.

Hall said he tried very hard in 2021 to get his proposed bill approved.

“I had the bill,” Hall told the Epoch Times. “I carried the bill to stop the mutilation of kids under 18 years old. This is not a discrimination thing. This is protecting children because we know this gender dysphoria is something that does happen to kids.

“They get confused. God doesn’t make us all complete when we’re born. It’s something that happens over time with mental and organ development. It’s called puberty.”

Gender dysphoria, according to the American Psychiatric Association, is a condition of distress created by an individual who identifies with the opposite biological sex.

As previously reported in the Epoch Times, separate studies found 88 per cent of boys and girls experiencing gender dysphoria–who had not yet undergone social transitioning–reported when they were teens that it was no longer an issue and they accepted their biological gender.

When reached on her cell phone, Georgulas declined to comment.

“People don’t know that the family courts operate with no oversight from the higher courts,” Younger said.

“You cannot appeal interlocutory judgments in the court. So, when a judge does this like the judge took my kids away from me, you can’t appeal.

“There’s no oversight by a higher court to double-check these judges and that needs to change. We need to be able to appeal interlocutory judgments that affect children in family court.”

An Aug. 3, 2021, court order shows that while Georgulas was granted most parental rights, neither parent may treat the child with hormonal suppression therapy, puberty blockers, or transgender reassignment surgery without both parents’ consent or court order.

But Younger claims that despite the order, Georgulas is skirting the edge of legality.

“She covers James after his evening showers with transgender lotions that add estrogens to his body,” Younger alleges.

“She feeds him high estrogen foods. She dresses him in girl’s clothes. He goes to school as a girl. He uses the girl’s restroom.

“Georgulas and the school faculty teach James that he really is a girl. He is one court order away from chemical castration.

“Still, I’m grateful that she hasn’t been able to put him on puberty blockers or hormones.”

“She [Brown] took my children away from me last summer, precisely because I’m talking about this publicly,” Younger added. She said because I’m telling people what they’re doing to my son that I can’t see my children anymore.

“She’s allowed my son to be socially transitioned. They call him by a fake girl’s name.”