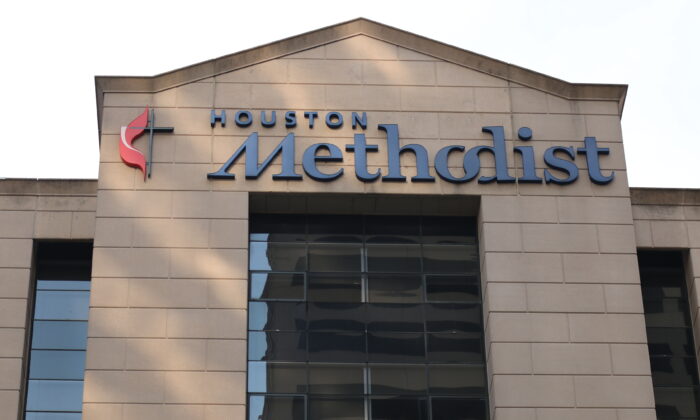 Houston Methodist Hospital has fired more than 100 employees who have refused to take COVID-19 vaccine. This photo was taken in Houston on June 22, 2021. (Mei Zhong/The Epoch Times)
Big Tech, Censorship, and Socialism

A Texas hospital announced that it has suspended the privileges of a doctor who posted concerns on social media about COVID-19 vaccine mandates and suggested that ivermectin may be able to treat the virus.

Dr. Mary Bowden, an ear, nose, and throat doctor at Houston Methodist Hospital, posted what was called “dangerous misinformation” that’s “not based in science” about the virus, the hospital announced on Twitter. The firm didn’t elaborate on the so-called misinformation and didn’t explain how her social media claims aren’t scientifically factual.

“Dr. Mary Bowden, who recently joined the medical staff at Houston Methodist Hospital, is using her social media accounts to express her personal and political opinions about the COVID-19 vaccine and treatments,” Houston Methodist, which drew national headlines for becoming one of the first hospital systems in the United States to mandate vaccines for all its employees earlier in 2021, wrote on Twitter.

Patty Muck, a spokesperson for the hospital, confirmed to media outlets over the weekend that Bowden’s privileges were suspended.

“The physician’s privileges at Houston Methodist have been suspended,” Muck wrote in an email to the Washington Post.

When contacted by The Epoch Times, a separate spokesperson for the hospital sent a statement that echoed several of its Twitter posts. The spokesperson didn’t elaborate on the suspension.

Last week, Bowden wrote on her Twitter account that “vaccine mandates are wrong” and included a screenshot of a message that apparently came from an individual who told her that “what the government is doing to its citizens in the United States is incomprehensible.” She also used her account to suggest that the anti-parasitic drug ivermectin may be able to treat COVID-19 symptoms.

In recent weeks, podcaster Joe Rogan and Green Bay Packers quarterback Aaron Rodgers both publicly confirmed that they took ivermectin after they were each diagnosed with COVID-19. The Food and Drug Administration (FDA) and the Centers for Disease Control and Prevention (CDC) haven’t recommended the drug to be used for treating the virus.

“Ivermectin might not be as deadly as everyone said it was. Speak up!” Bowden said on Nov. 10.

Bowden’s attorney, Steve Mitby, told local media outlets that the doctor has treated more than 2,000 COVID-19 patients and said she isn’t against vaccines.

Speaking to local media outlet Click2Houston, Bowden, who also runs her own private practice, BreatheMD, said she had a “great relationship” with Houston Methodist.

But the “issues with vaccines and ivermectin really go against patient autonomy and their right to choose their treatment,” she said.

“All of my comments are backed by clinical experience,” Bowden told the Houston Chronicle. “I have been open seven days a week since the pandemic began, performing over 80,000 COVID tests and treating over 2,000 patients with COVID.”

Mitby’s law firm didn’t respond to a request for comment by press time.