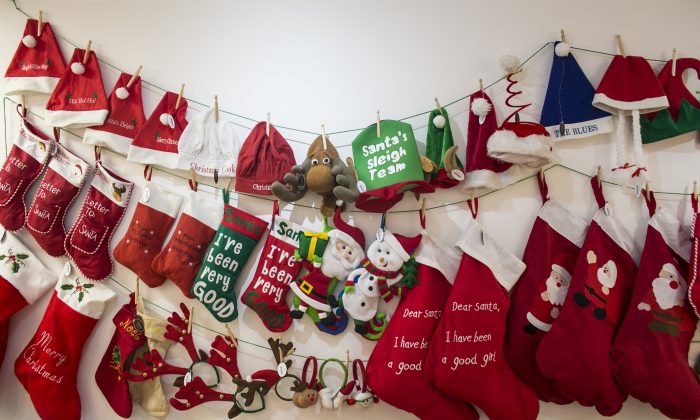 Christmas stockings are displayed in the showroom at the Festive Productions Ltd. premises in Cwmbran, Wales, on Dec. 10, 2013. (Matt Cardy/Getty Images)
By Zachary Stieber

Two Texas hospitals continued the tradition of sending babies born on or near Christmas home in red and white stockings.

“We are so pleased our labor and delivery departments can offer these hand-sewn special keepsakes during the holiday season,” Moody Chisholm, UT Health East Texas CEO, told the Jacksonville Progress.

“These parents already are taking home the best gift possible this season, and we hope this stocking is a fun reminder for years to come of how small their bundle of joy once was.”

Lauren and Kyle Nicholson got the first stocking after welcoming their first child, Hannah Alysce, on Dec. 1.

Lauren Nicholson said they plan on hanging the stocking over the mantel beginning this year and keep it so that their daughter can see how small she was when she was born.

The stockings were hand-sewn by the local Church of Jesus Christ of Latter Day Saints, with at least 130 sewn and plans to make more.

The hospital receives the handmade stockings from a volunteer group, Bluebirds of Methodist Hospital, which also supports employees in a myriad of other ways, reported KSAT in 2016.

The Bluebirds said that the days leading up to Christmas are one of their favorite times of year and noted that the tradition at the hospital dates back about 50 years.

The stockings at the hospital are handed out to newborns from Dec. 20 to Dec. 29.

People commenting on a picture of newborns stuffed into stockings on the Bored Panda website shared a few personal stories regarding the stockings.

“When I was born I was born 2 months premature and when my family came to visit me I was wrapped up like this! I was 2 lb. and 11oz,” wrote Kezia Hatch.

“When my youngest daughter was born New Years Day she was wrapped in a white stocking with a red band while the other holiday babies were in red ones. They hung another stocking with the year stenciled on it over the handle,” said Nancy Rigato.

“When my son was born, he was too big to fit in the stocking, so they put a Santa hat on him,” added Dawn Bailey.

Approximately 3.86 million births took place in 2017 in the United States, according to a report (pdf) from the Centers for Disease Control and Prevention published in November 2018. Data was gleaned from birth certificates.

That number was down 2 percent from 2016. Birth rates declined for women 39 or younger but increased for older women.