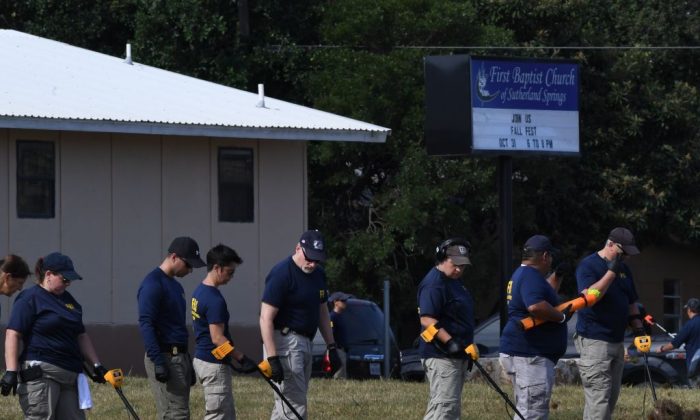 FBI agents search for clues at the entrance to the First Baptist Church, after a mass shooting that killed 26 people in Sutherland Springs, Texas on Nov. 6, 2017. (Mark Ralston/AFP/Getty Images)
Crime and Incidents

The gunman in the Texas church shooting, Devin Kelley, dated an underage girl and hounded his ex-girlfriends, trying to bribe them to hang out with him, according to NBC.

Kelley had a troubled and violent past, with an arrest for animal cruelty and a court-marshal for assaulting his baby stepson and his first wife, the report said.

One former girlfriend said that he also tried to assault her, and another that he dated her when she was underage.

Brittany Adcock, 22, said she dated Kelley for two months when she was 13 and he was 18.

After she broke it off, he hassled her through fake Facebook profiles, and constant phone calls, offering her money to hang out with her, according to Reuters. It only stopped about six months ago.

She was forced to call the police, change her phone number and to file a complaint with police.

“He just started getting really weird,” Adcock, now 22, told NBC, describing how he had asked her to move in with him and to walk around topless.

Another ex-girlfriend, Katy Landry, who met Kelley in church as a teenager, also said Kelley had continued to hassle her after they broke up.

“Years after dating me he would try to bribe me to hang out with him,” Landry told NBC News in a Facebook message. “He ended up assaulting me. He would stalk me by repeatedly calling me—even prank calling me, saying really weird stuff.”

“That was another thing about him—he was very sick in the head…He would tell me very sick strange things,” she said, without providing any details.

Kelley divorced his first wife in New Mexico in 2012 and married Danielle Shields in Texas in 2014, soon after his discharge, according to state records, said NBC.

Kelley walked into the First Baptist Church in Sutherland Springs, Texas and opened fire with an assault weapon, killing at least 26 people on Sunday.

A local resident fired shots at him, and he fled in a car. After a pursuit during which his car crashed, he was found dead, killed by what authorities believe were self-inflicted gunshots.

He had been involved in a “domestic situation” with his in-laws—who sometimes worship at the church—sending them threatening text messages, Texas officials said, according to Reuters.

A local resident told the LA Times that Kelley had been adding strangers in the area on Facebook and starting online fights with them.

“It’s like he went looking for it, you know what I mean?”Johnathan Castillo told the newspaper. “You can tell people who are defending their opinions versus someone who’s looking to start something.”

A lot of people were deleting him from Facebook for “starting drama” Castillo said.