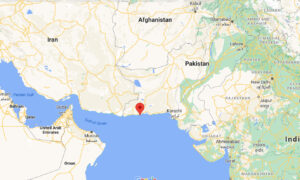 Authorities captured the suspect late Thursday following an hours-long police standoff where one officer was killed and four others were wounded in a small West Texas city.

Omar Soto-Chavira, 22, was injured when he was taken into custody around 11:30 p.m. at a home in Levelland, police Chief Albert Garcia told reporters. The suspect was being transported to a hospital in Lubbock for treatment, Garcia said. The extent of the suspect’s injuries was not disclosed.

Authorities used robots to enter the home, then deployed gas which drew Soto-Chivara out of the residence, Lubbock County Sheriff Kelly Rowe said at the briefing.

The standoff between the suspect and law enforcement had begun at the home around 1 p.m. Central Time after someone reported a man as possibly armed along the residential street in Levelland, about 30 miles west of Lubbock. The confrontation escalated quickly, gunfire erupted as the suspect barricaded himself inside a house, and a standoff ensued.

Three of the wounded officers were taken to a Lubbock hospital. Sgt. Josh Bartlett of the Lubbock County Sheriff’s Office was taken to Covenant Health Levelland hospital and died of his wounds, according to a sheriff’s office statement. Bartlett was the commander of the sheriff’s tactical unit.

Levelland police Sgt. Shawn Wilson was in critical but stable condition in University Medical Center in Lubbock after surgery, said Garcia. The other three officers were treated for minor injuries and had been discharged from the hospital, he said.

Hockley County Sheriff Ray Scifres had said the suspect had a history of contact with police. He also said Bartlett, leader of the Lubbock County Sheriff’s Office’s SWAT command, was a nine-year veteran of the department who had served overseas in the U.S. Army.