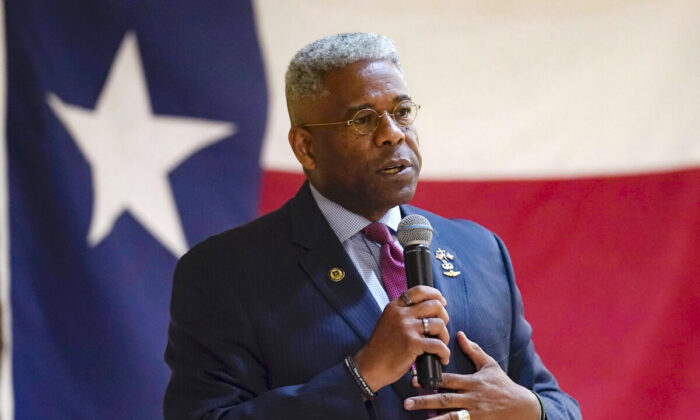 Retired U.S. Army Lt. Col. Allen West, a candidate for the Republican nomination for the governor of Texas, announced late Saturday that he had been diagnosed with COVID-19.

He wrote on Twitter that he and his wife, Angela West, who had also been diagnosed with COVID-19, both completed monoclonal antibody infusion therapy and “are in the observation period.”

“There’s a concern about my oxygen saturation levels, which are at 89 and they should be at 95,” he said. “My chest X-rays do show COVID pneumonia, not serious. I am probably going to be admitted to the hospital.”

According to West’s Twitter account, his wife tested positive for COVID-19 on Friday after she was given vaccines for COVID-19 and the flu.

He was “already taking Hydroxychloroquine and Ivermectin protocols” and did not receive the vaccine.

“LTC West has publicly stated he supports individual choice and this is reflected in his own family,” reads a Twitter post shared on Saturday.

He said on Twitter he had attended an indoor event in Seabrook, Texas. The post described the Mission Generation Annual Gala and Fundraiser as a “packed house.”

West was a former U.S. representative for Florida from 2011 to 2013, and was the chairman of the Republican Party of Texas from 2020 to 2021. He announced in July he was stepping down from the latter role to challenge Gov. Greg Abbott in the 2022 primary race. Abbott is seeking a third term.

West has been critical of COVID-19 lockdowns and restrictions in the Lone Star state and in October 2020 participated in a protest outside Abbott’s home over the matter. Those restrictions have since been lifted.

Texas Republicans, including West, filed a lawsuit (pdf) against Abbott in September 2020 for having extended early voting amid the COVID-19 pandemic.