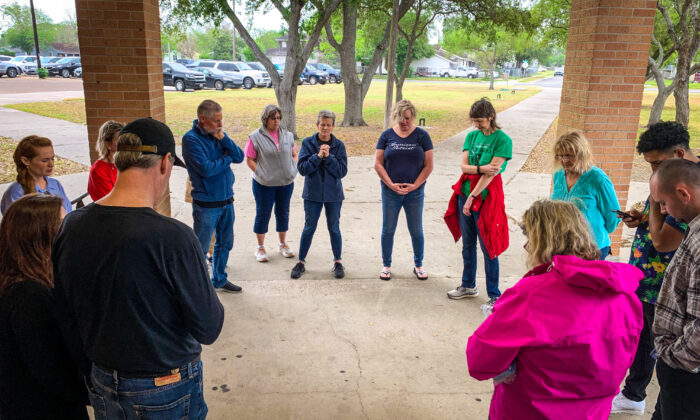 A Texas group is celebrating a win in its fight to block what it considers “harmful” sex-education lessons in some schools in Corpus Christi.

That U.S. Department of Health and Human Services (HHS) grant program aims to spread that curriculum, and others like it, throughout the country. The stated goal is to reduce teen pregnancy and sexually transmitted infections.

Yet, an international watchdog group says the real goal is motivated by a global movement by the “sexual left” to sexualize children and change what’s accepted as normal sexual behavior by targeting the young in the United States and around the world.

Schools here and in many other countries have already adopted curricula that further those goals, often without the knowledge of parents, said Sharon Slater of Family Watch International. The 23-year-old nonprofit has “consultative status” with the United Nations and educates world leaders and diplomats about policies affecting families.

Family Watch International has become particularly concerned about programs such as MPC, known as comprehensive sexuality education (CSE), Slater said. Her organization would like to see CSE programs rejected by school districts because the programs harm children, she said.

But the group faces powerful opposition.

Propelling the push to add CSE programs to schools in the United States are the HHS grants totaling about $110 million, Slater said. The money, set aside for the purpose during the Obama administration, goes to organizations pledging to work to implement CSE programs in specific regions, she said.

Family Watch International maintains an online map that shows some of the districts where CSE programs have been implemented in each state. By clicking on states, people can find details of grants paying for the sex-ed programs.

But there’s no “neat and tidy way” to find all the school districts using harmful CSE materials, Slater said. That’s because of a new trend to weave in sexuality lessons during other classes throughout the school day, rather than dedicating a class period for the purpose of teaching sex ed, she said.

Hoping to give parents tools to know more about what’s taught in their children’s schools, the group publishes reports on what it identifies as the harmful elements in each CSE program. MPC was designed for ages 12 to 18 and contains all 15 categories of material that concern the group. Graphic examples are provided in an analysis online. (PDF)

In response to questions from The Epoch Times about the report, Lauren Ranalli, director of marketing and communications, said in a written statement: “ETR believes young people deserve access to high-quality, science-based health education.

“Making Proud Choices is an evidence-based curriculum that meets the federal Office of Population Affairs effectiveness criteria for impacting rates of teen pregnancy, STIs, or sexual risk behaviors. The curriculum provides adolescents with the knowledge, confidence, and skills necessary to reduce their risk of sexually transmitted infections (STIs), HIV, and pregnancy by abstaining from sex or using condoms if they choose to have sex.”

But Family Watch International and Nueces County parents say that characterization of the curriculum is misleading.

“We will tell you that it’s age-inappropriate, medically and scientifically inaccurate sexualization education that’s comprehensive for children,” Slater said.

MPC is designed for ages 12 to 18, according to the ETR website. The curriculum suggests to children that most in their age group are sexually active, the Family Watch International report says.

The program contains role-plays in which children act out how to negotiate for consent to use a condom for sex. A model of male genitalia—used in condom placement and removal activities—is suggested for each child to use while being taught.

The Epoch Times contacted the office of the top education official in each state. Most didn’t respond to questions about whether MPC is used in their schools. A handful said all sex-ed curriculum choices are made locally and aren’t known at the state level.

In Missouri, MPC is one of four curricula that some schools can choose, a spokeswoman confirmed. Some Alabama schools also use the curriculum, but it wasn’t clear where it’s used, a spokesman for that state said. One Washington district uses MPC, a spokeswoman said, but she didn’t know which district.

Parents in Nueces County, Texas, are relieved that they succeeded in persuading members of their local school health advisory council that the program has no place in their community.

But the nonprofit receiving federal grant money to implement the program is still working to have it used in the other 12 school districts in Nueces County, as well as throughout Aransas, Bee, Kleberg, and San Patricio counties in Texas.

As soon as he learned of the plan, Colby Wiltse, the father of two children under the age of 6, jumped into action.

“I want to be a voice for the voiceless,” said Wiltse, executive director of the Nueces County chapter of County Citizens Defending Freedom (CCDF). While his older child attends kindergarten at a private school and his younger child is a toddler, he still felt a duty to get involved.

“Who’s going to stand in the gap for the other kids?” he said. “This kind of curriculum is just not good for any kid.”

His CCDF chapter is part of the Florida-based national organization founded to train and encourage citizens throughout the country “to defend faith, freedom, and liberty” through local chapters. Leaning on principles outlined in the U.S. Constitution, the Declaration of Independence, the Bill of Rights, and the Federalist Papers, organization members look for what they identify as “a breach of freedom or liberty.”

Key in their mission is their response, Wiltse said. It’s modeled after principles outlined in the Bible in the Gospel of Matthew, Chapter 18, verses 15–17. Those verses, Wiltse said, require them to first address a problem with the responsible party, such as a local elected official.

If the problem isn’t corrected, the organization makes local citizens aware. If there’s still no resolution, CCDF takes the concern to local or national media. Then if authorities still don’t fix the problem, the group takes legal action.

It didn’t take an army to effect positive change in part of Nueces County, Wiltse said. The dedication of a few motivated residents allowed them to accomplish their goal.

He started with research. He learned that the nonprofit Coastal Bend Wellness Foundation was receiving grant money from the U.S. Department of Health and Human Services to bring the sex-ed program to more than 9,000 “adolescents ages 15-19, including LGBTQ+ youth” in his area of South Texas.

The publisher’s online description of the program worried him. Then he discovered the detailed analysis by Family Watch International, which left him incredulous.

He described his concerns at an October 2021 school board meeting. With obvious discomfort, he told board members about the curriculum’s videos of animated sex acts.

He said the curriculum told children they didn’t necessarily need to tell their parents if they wanted to get tested for pregnancy or sexually transmitted diseases. He began to describe instructions from the curriculum on adapting condoms for use as dental dams, then stopped.

“I’m not even going to read what those are to be used for, out of respect for people here,” Wiltse said.

“At the end of the day, I don’t think it’s the public school’s job to teach my children about sex,” he told school board members. “That responsibility belongs to me and my wife. Your responsibility is to protect our children from harmful materials, like Making Proud Choices!”

But he didn’t stop there.

He and others from his group started attending school health advisory council meetings in their community and others. The councils, required under Texas law, evaluate and recommend sex-ed programs to school boards. Many states have laws requiring similar panels for the same purpose.

At those meetings, they listened as Coastal Bend Wellness Foundation representatives explained why MPC should be implemented in their schools.

What they say about trying to prevent teen pregnancy and sexually transmitted diseases sounds “good on the surface,” Wiltse said. But “they weren’t presenting the truth. They were sugar-coating it.”

He told school district decision-makers that he felt “Making Proud Choices! is essentially a manual for sexual activity.”

Wiltse’s group provided copies of the Family Watch International analysis of MPC to members of all 13 advisory councils in his county. On April 20, the one in his own community voted 8–1 to reject the curriculum.

“The process works!” Wiltse rejoiced. But his fight is far from over.

“Coastal Bend Wellness is still trying to get Making Proud Choices! into other smaller school districts in the area. But CCDF is aware of this, and we will be there to shine the light and continue to expose this curriculum.

“The way I see it is ordinary citizens came together to stop a harmful curriculum from entering [some of] our schools. If more citizens would get engaged, have the courage to speak the truth, and put God first in everything we do, then we would see real positive change in our counties across the country!”

From Slater’s vantage point of examining family policy issues from an international perspective, she agrees there’s more work to be done to keep harmful sex-ed programs out of schools in the United States and in other countries. But it’s ultimately up to parents, she said.

“[School officials] know if parents get a hold of it, they’re going to try to stop it. So they’ll do everything to try to hide it.

“The parents are going to have to become super investigators and just demand to see and find out what’s being taught.”