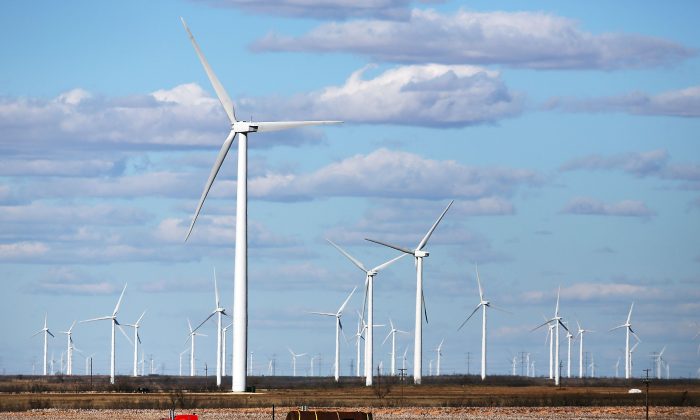 Wind turbines are viewed at a wind farm in Colorado City, Texas, on Jan. 21, 2016. Wind power accounted for 8.3% of the electricity generated in Texas during 2013. (Spencer Platt/Getty Images)
Texas

Texas’s main grid operator said it was forced to take emergency measures on Wednesday to avert rolling blackouts amid a heatwave and a lack of power produced by wind turbines because of low winds and poor solar power production.

The Electric Reliability Council of Texas (ERCOT) issued a conservation appeal for 2 p.m. to 9 p.m. Wednesday. It comes as Dallas and other cities saw triple-digit temperatures. And in Houston, the largest city in Texas, temperatures hit 101 degrees Wednesday, and highs are expected to remain above 97 degrees into the weekend, says a bulletin from National Weather Service.

“ERCOT is asking Texans and businesses to voluntarily conserve electricity during this time. Currently, no system-wide outages are expected,” said the operator in a news release. “[Wednesday’s] conditions are expected to be similar to those experienced on Monday, July 11, 2022. On that day, Texans and businesses responded by voluntarily conserving electricity and helping ERCOT successfully meet record power demand by reducing their energy use by 500 [megawatts].”

According to the news release, one of the reasons for the conservation appeal and possible grid disruption is due to “low wind,” and it noted: “Wind generation is currently generating less than what is historically generated in this time period.”

That’s coupled with a heat wave that has impacted much of the central United States, including Texas, which has driven a higher amount of electric use—ostensibly due to air conditioning.

It noted that more than four-dozen conservation appeals have been made since 2008 to deal with grid operations. Meanwhile, other grid operators are using similar conservative operations programs because of the heatwave.

An ERCOT spokesperson told Reuters that the operator is also blaming forced outages at coal- and natural gas-fed power plants, along with the low wind power generation. A spokesperson declined to provide details on the number or type of generating plants that were offline and prompted conservation measures.

Doug Lewin, president of consultants Stoic Energy LLC, told the news agency that there was less coal and natural gas generation capacity available on Wednesday than on Monday when ERCOT last called for conservation measures.

“Starting immediately, all thermostats in county buildings will be turned to 78 degrees and I encourage all businesses and residents to do the same,” Jenkins said on the platform.

In February 2021, a grid failure led to the deaths of more than 200 people in freezing weather and prompted an overhaul of the grid regulator.