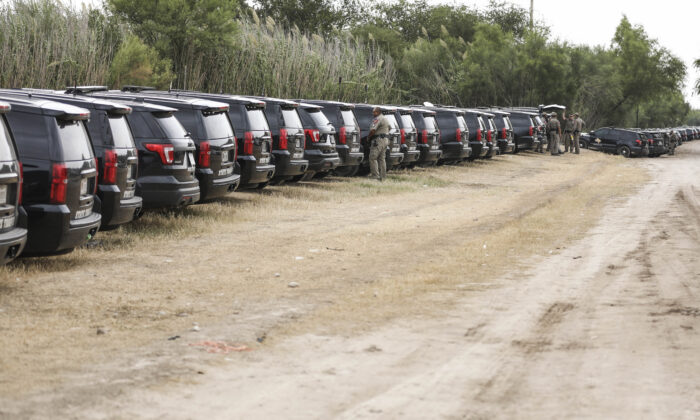 Texas State Police vehicles are lined up along the border as thousands of illegal immigrants, mostly Haitians, live in a primitive, makeshift camp under the International Bridge, which spans the Rio Grande between the United States and Mexico, while waiting to be detained and processed by Border Patrol, in Del Rio, Texas, on Sept. 21, 2021. (Charlotte Cuthbertson/The Epoch Times)
Immigration & Border Security

During an interview with Fox News, the Republican governor said the barrier of vehicles prevented people from illegally “walking into the state of Texas.”

In photos taken at the scene in Del Rio, thousands of Haitians can be seen congregating under a bridge, and a significant number of DPS vehicles are parked along a road near a waterway. The wall of vehicles, Abbott said, has prevented illegal aliens from crossing a dam into Texas.

“The Texas Department of Public Safety stepped up,” he said, adding that if President Joe Biden followed a judge’s order to reimplement the Trump-era “Remain in Mexico” protocols, there wouldn’t be “chaos” in Del Rio.

“Because the Biden administration has been promoting and allowing open border policies, it has been the state of Texas that had to step up,” Abbott said Sept. 21 during a news conference in Del Rio with local officials, including the city’s mayor, Bruno Lozano.

Biden, meanwhile, has faced significant criticism from Republicans and some Democrats whose districts lie along the border for dozens of immigration-related orders, including one that suspended construction of the physical border wall. The president has described it as ineffective and a waste of money.

The White House, amid the surge of Haitian illegal immigrants, has attempted to pivot away from the burgeoning crisis by focusing on photos of Border Patrol agents on horseback apprehending people who illegally crossed the border. At the same time, the administration said it’s planning to double the number of Haitians being deported back to their country of origin.

“What I saw depicted about those individuals on horseback treating human beings the way they were, was horrible,” said Vice President Kamala Harris, whom Biden has tasked with taking the lead on migration issues.

“I’m deeply troubled about it,” she added, voicing support for a Homeland Security investigation into the matter.

However, a top Border Patrol union official said that statements made by White House officials, including press secretary Jen Psaki, are false.

“That’s your ‘defund the police’ movement right there,” Brandon Judd, head of the National Border Patrol Council, told The Epoch Times of the images and video footage of agents on horseback. “They only show a short segment of a video. The horse patrol agents under the administration are trained to ensure the safety of the migrants, to keep them away from the horses, because the horses can harm people—they can inadvertently step on them, they can rear up, they can kick them.”