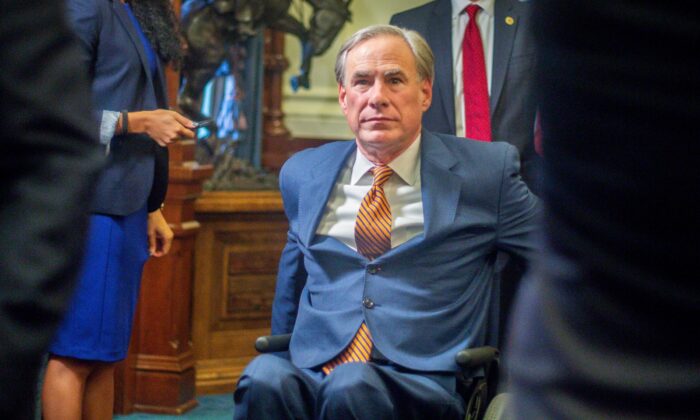 Texas Gov. Greg Abbott leaves a press conference where he signed Senate Bills 2 and 3 at the Capitol in Austin, Texas, on June 8, 2021. (Montinique Monroe/Getty Images)
By Isabel van Brugen

Texas Gov. Greg Abbott has issued an executive order maintaining the state’s prohibition of COVID-19 vaccine mandates by any government entity, regardless of a vaccine’s approval status with the U.S. Food and Drug Administration (FDA).

The Republican governor also said he was adding the issue of vaccine mandates to the Special Session agenda.

The Aug. 25 executive order (pdf) comes two days after the FDA gave full approval to Pfizer’s COVID-19 vaccine. Abbott had previously blocked making vaccinations distributed under emergency use authorizations mandatory. The other two vaccines available in the United States, from Moderna and Johnson & Johnson, are currently operating under emergency use authorization.

The governor’s latest order states that “no governmental entity can compel any individual to receive a COVID-19 vaccine,” with exceptions for places such as nursing homes, state-supported living centers, assisted living facilities, or long-term care facilities.

A “public or private entity that is receiving or will receive public funds” cannot require a “consumer” to present proof of vaccination in order to receive a service or enter a place, the order states.

A spokesperson for the governor told the Texas Tribune that private businesses have the option of mandating vaccines for employees, saying, “Private businesses don’t need government running their business.”

Abbott said in a statement that he will ask lawmakers to consider which exemptions should apply.

“Vaccine requirements and exemptions have historically been determined by the legislature, and their involvement is particularly important to avoid a patchwork of vaccine mandates across Texas,” Abbott said in a statement.

The Texas House finally restored quorum last week when enough Democrats returned to the state after staging a 38-day protest of a Republican-backed election overhaul measure.

Abbott has also banned mask mandates from being enforced by state and local government entities.

In an executive order issued on July 29, Abbott said that government entities such as county, city, school district, or public health authorities risk a $1,000 fine if they try to impose mask mandates.

His mask mandate ban has been defied by the city of El Paso, nine counties, and dozens of school districts. Dallas County on Aug. 25 became the latest county in the Lone Star State to obtain a court order blocking enforcement of the ban.

The FDA’s full approval of the Pfizer vaccine has sparked a growing number of schools and employers to mandate vaccinations.

“Today, I’m calling on more companies in the private sector to step up with vaccine requirements that will reach millions more people. If you’re a business leader, a nonprofit leader, a state or local leader, who has been waiting for full FDA approval to require vaccinations, I call on you now to do that,” Biden said on Aug. 23.

“Require it. Do what I did last month. Require your employees to get vaccinated or face strict requirements.”

The American Postal Workers Union was one of a number of unions to voice opposition to such mandates.

As the White House considered so-called vaccine passports as a condition of employment for federal employees, the union said last week that it’s “not the role of the federal government to mandate vaccinations for the employees we represent.”