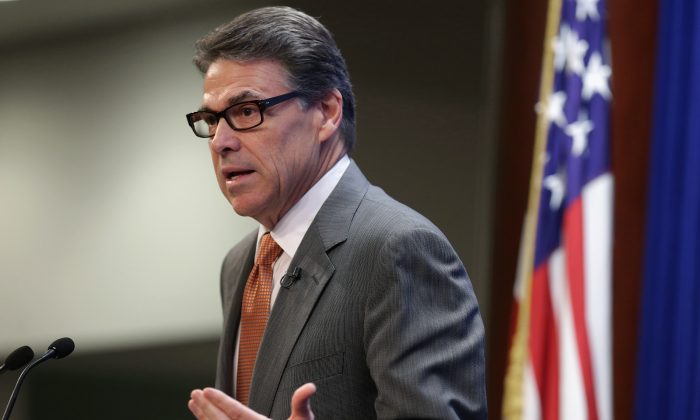 Texas Gov. Rick Perry at the conservative think tank The Heritage Foundation in Washington Aug. 21. People have criticized a tweet sent from his account Sunday. (Chip Somodevilla/Getty Images)
US

Texas Gov. Rick Perry is getting criticized for a message sent out from his official Twitter account, proving yet again that politicians should be careful what they post to social media.

A Sunday night message from Perry’s verified account featured an unflattering picture of the Democratic district attorney at the center of his criminal indictment on charges of abuse of power.

At about 8:30 p.m. Sunday, a message that included a graphic mocking Travis County District Attorney Rosemary Lehmberg was sent out. In the graphic, Lehmberg was depicted as The Most Interesting Man in the World, a Dos Equis beer ad campaign character. The character in the original ad is a man in a black suit sitting at a table. Lehmberg’s face was photoshopped into the ad image.

According to numerous media outlets who captured the image before it was deleted, the text on the graphic tweeted from Perry’s account read: “I don’t always drive drunk at 3x the legal blood alcohol limit… But when I do, I indict Gov. Perry for calling me out about it. I am the most drunk democrat in Texas.”

The history between Perry and Lehmberg just in the past year has been venomous.

After Lehmberg was arrested for drunk driving in 2013 with a blood alcohol level nearly three times the legal limit, Perry threatened to veto funding for the state’s Public Integrity Unit unless she resigned. When she refused, the governor vetoed $7.5 million in funds to her office.

In August, a grand jury led by Michael McCrum, a San Antonio-based special prosecutor assigned by a Republican judge, convened in Austin. The grand jury indicted Perry, a potential 2016 presidential candidate, prompting him to call it a political ploy.

The public response to Perry’s excuse about the unsavory tweet was largely critical.

“You liar,” tweeted Annie Stone, a New Hampshire high school student. “You tweeted that and realized it was a stupid thing to do, like when you tried to name all 3 agencies.”

Elizabeth West, an actress, described the tweet as “vile,” and scolded Perry for his explanation. “You might have to do better than that, Governor,” she wrote.

Others seemed more amused, though. A resident of Texas, Mike Nelms, was one of them.

“Well it was funny!” he wrote.

Perry’s official Twitter account is typically updated about three to four times a day, but the messages posted are typically retweets of supportive constituents and organizations or photos and messages related to the governor’s work around the state. The account has 249,000 followers.

In 2011, he was criticized for blocking reporters from following his Twitter feed, which he personally managed at the time, according to media analysis organization Poynter. At the time, a data developer named Yahel Carmon created a Twitter account just to host an RSS feed of Perry’s tweets for journalists to monitor.

Perry is the longest-serving governor in the history of Texas.