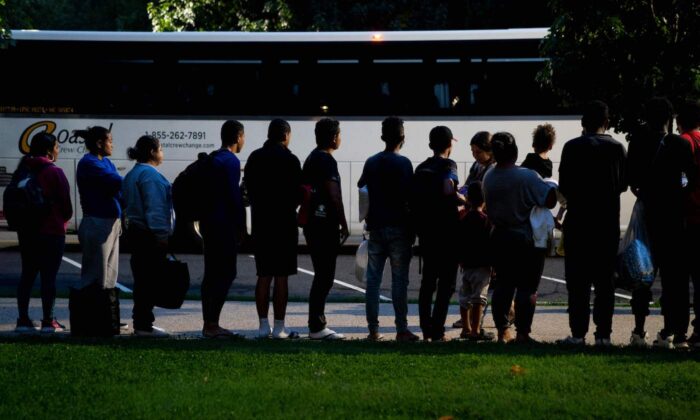 Illegal migrants, who boarded a bus in Texas, listen to volunteers offering assistance after being dropped off within view of the U.S. Capitol building in Washington on Aug. 11, 2022. (Stefani Reynolds/AFP via Getty Images)
US News

Texas Gov. Greg Abbott on Wednesday said that illegal aliens apprehended along the U.S.-Mexico border are now being bused to Chicago in addition to New York City and Washington.

Abbott said his strategy to bus illegal immigrants from Texas to the Democrat-led sanctuary cities makes a strategic point about the impact of President Joe Biden’s “open border policies” on American communities.

“President Biden’s inaction at our southern border continues putting the lives of Texans—and Americans—at risk and is overwhelming our communities,” the Republican governor said in a statement.

“I look forward to seeing this responsibility in action as these migrants receive resources from a sanctuary city with the capacity to serve them,” Abbott said.

The Chicago mayor’s office confirmed that around 60 illegal aliens arrived at Union Square from Texas on Wednesday night and were being provided with essential services while they “navigate the next steps of their journey.”

“As a city we are doing everything we can to ensure these immigrants and their families receive shelter, food, and most importantly protection,” the spokesperson said in a statement. “This is not new; Chicago welcomes hundreds of migrants every year to our city and provides much-needed assistance.”

The spokesperson also accused Abbott of having no “shame or humanity” and described the busing program as “racist practices.”

The mayors of Washington and New York City, Muriel Bowser and Eric Adams, have also criticized the busing program, calling it a political stunt.

But Abbott has said the illegal immigrants voluntarily chose to go to their cities where there is more capacity to serve them.

The Texas governor first directed the Texas Division of Emergency Management in April to charter buses to transport illegal immigrants who claimed asylum when apprehended along the U.S.-Mexico border to Washington.

New York City was added as a second drop-off location in August.

Since then, more than 8,900 illegal aliens have been bused out of Texas to those cities, providing “much-needed relief to Texas’ overwhelmed border communities,” according to Abbott’s office.

Overwhelmed with the influx of illegal aliens arriving from Texas, Bowser has twice asked the Biden administration to deploy National Guard personnel to help her city cope. Both requests were denied.

“Chicago has been a welcoming city and a city of immigrants since its very founding, and proudly so,” Lightfoot said at the time.

Abbott’s office noted that under this policy Chicago doesn’t deny city services to individuals based on their immigration status.

“With its ‘Welcoming City Ordinance’ making it a sanctuary city, Chicago will not deny city services to individuals based on their immigration status. The city also does not require local police to cooperate with federal immigration authorities,” Abbott’s office said.

Abbott promised to keep busing illegal aliens to so-called sanctuary cities until the Biden administration “does its job” to secure the border.