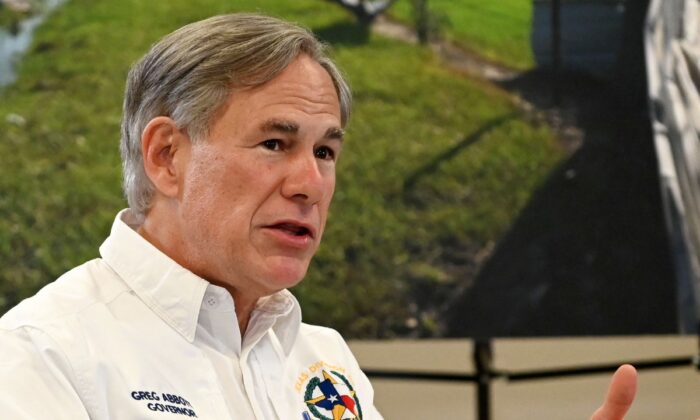 Texas Gov. Greg Abbott has issued a disaster declaration at the state’s southern border to augment additional resources to efforts addressing the humanitarian crisis at the border.

“President Biden’s open-border policies have paved the way for dangerous gangs and cartels, human traffickers, and deadly drugs like fentanyl to pour into our communities,” Abbott said in a statement.

“Meanwhile, landowners along the border are seeing their property damaged and vandalized on a daily basis while the Biden Administration does nothing to protect them. Texas continues to step up to confront the border crisis in the federal government’s absence, but more must be done.”

The declaration (pdf) targets resources in areas that could protect landowners who are dealing with property damage due to trespassers on their land. Abbott has also directed the Texas Department of Public Safety to ramp up its efforts in enforcing federal and state laws relating to offenses such as criminal trespassing, smuggling, and human trafficking.

The Texas Health and Human Services Commission has also been directed to stop issuing state licenses to child care facilities under a contract with the federal government that shelters or detains unlawful immigrants.

“By declaring a state of disaster in these counties, Texas will have more resources and strategies at our disposal to protect landowners and enforce all federal and state laws to combat criminal activities stemming from the border crisis. Working together with local law enforcement, the state will continue to take robust and meaningful action to keep our communities safe,” Abbott said.

The declaration comes amid a significant surge in illegal immigration in recent months. For the month of April, Border Patrol agents encountered over 178,000 illegal immigrants, according to the latest statistics. This is up from just over 173,000 individuals encountered in March. The number of border encounters has been rising steadily since October last year but spiked in February after President Joe Biden took office.

In March, Abbott had launched Operation Lone Star as an effort to address the border crisis. The operation added resources to deter illegal border crossings and directed state law enforcement to interview unaccompanied minors, children who illegally enter the country without an adult, to identify victims of human trafficking.

Since its launch, the Operation has made over over 1,300 criminal arrests, apprehended over 35,000 illegal immigrants, and seized over 10,000 pounds of drugs and over 100 firearms, the governor said.

Republican lawmakers have long argued that the burgeoning crisis is a result of Biden’s move to overturn several Trump-era immigration policies that helped curbed the flow of illegal border crossings. This includes his predecessor’s cornerstone Migrant Protection Protocol (MPP), which effectively ended the problematic “catch and release” policy, significantly stemming the surge of illegal immigrants that were seen at the southern border in 2019. The MPP, which was on pause, was officially terminated on Tuesday.