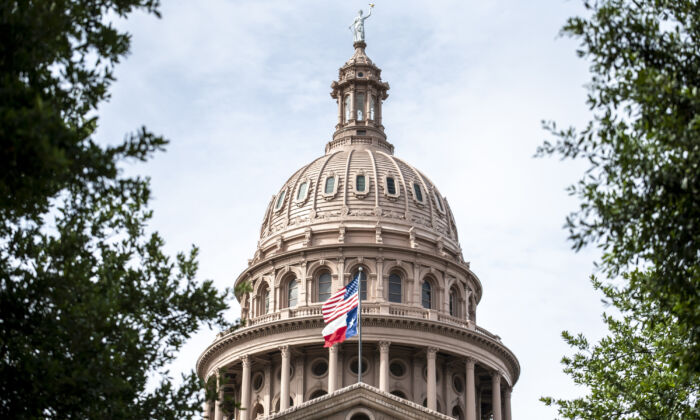 The United States and Texas state flags fly outside the state Capitol building on July 12, 2021 in Austin, Texas. (GettyImages)
US News

Texas GOP delegates earlier this month voted on a platform item urging the state legislature to put Texit, the movement to secede from the United States, on the ballot in 2023.

With their rough-and-tumble independent streak, secession has long been a theme for Texans and the state Republican conference from June 16 to June 18 again raised the issue.

Now, amid a polarized political landscape in America and increasing tension over federal overreach, it looks like Texit is getting more traction.

At the convention the party platform contained a “plank” under the heading of “State Sovereignty,” stating federal legislation infringing upon the rights of Texas should be opposed and nullified.

The state sovereignty platform item wasn’t new, but the call to put Texit on the ballot was. The “plank” urged the state legislature to pass a bill requiring a referendum on the issue in the 2023 general election.

Texans would “determine whether or not the state of Texas should reassert its status as an independent nation,” according to the document.

The results of the delegate vote on platform items should be released this week, according to the state GOP.

Texas broke away from Mexico in 1836 and became an independent republic before being annexed by the United States in 1845.

Texas voted to secede in 1861 along with Southern states over state’s rights and questions over the expansion of slavery into western territories, ultimately leading to the Civil War.

During Reconstruction, the United States readmitted Texas into the union in 1870.

Legal scholars say Texas had no right to secede, but some folks in the Lone Star State beg to differ and point to the authority granted in the Texas Constitution.

State Rep. Steve Toth (R-Woodlands) told The Epoch Times that extremism is pushing Texas to act, though it’s unlikely to get on the ballot next year.

For example, instead of accepting the U.S. Supreme Court’s ruling on Roe v. Wade, some in the federal government are talking about setting up abortion camps on federal land.

“The Left has done everything they can to jump off the cliff,” he said. “They are the ones pushing Texas into doing something extraordinary.”

Daniel Miller, president of the Texas Nationalist Movement, told The Epoch Times that the added language in the Republican platform is significant for Texit.

“Definitely, it’s a breakthrough,” Miller said, adding that while some may portray the Texit movement as a fringe idea, his organization of more than 400,000 members includes people on both sides of the aisle.

His organization poses the question: Would Texas do it all over again if given a chance?

“If we wouldn’t vote to join the union now, why in the world would we vote to stay?” Miller asked.

Barbara Chapman, a Republican delegate from Weatherford, told The Epoch Times she favors seceding because it would allow Texas to control its border, drill its oil and gas, and stop abortion.

“This world is out of control,” she said. “I’m all for it. I have hopes for Texas. We have our way of life.”

The Texit movement picked up steam in 2021 after State Rep. Kyle Biedermann (R-Fredericksburg) filed a bill to create a referendum on whether Texans should create a joint legislative committee to develop a plan to achieve Texas independence. The bill was never taken up for a vote and died.

In a statement, Biedermann pointed to the authority to secede granted to Texans in the state’s constitution. The document says Texans “have at all times the inalienable right to alter, reform or abolish their government in such manner as they may think expedient.”

“For decades, the promises of America and our individual liberties have been eroding. It is now time that the people of Texas are allowed the right to decide their own future,” Biedermann said in a statement.

But many have long questioned the legality of seceding.

The case law most frequently cited against secession is the 1869 Texas v. White decision.

The U.S. Supreme Court held that the United States is “an indestructible union” from which no state can secede, even if ratified by the majority of Texans.

But Miller argues that Texas v. White was based on the wording in the Preamble to the Constitution, which has no power according to a later 1904 case Jacobson v. Massachusetts.

Though it is unlikely that Texas could find the votes in the state legislature to get the provision on the ballot in 2023, the question remains whether President Joe Biden would let Texas leave without a fight.

If a headline in the Washington Post is any indication, a divorce might be mutually agreeable: “Opinion: Texas Republicans want to secede? Good riddance.”

After all, Democrats would see an advantage in letting Texas leave with its 38 electoral votes. No Republican would likely be elected to the U.S. presidency in the near future.

Miller said Texas, with the ninth-largest economy in the world, could operate and care for itself more efficiently on its own.

The idea that the federal government wouldn’t let Texas leave the union sounds like something an abusive spouse or a dictator would say, he said.