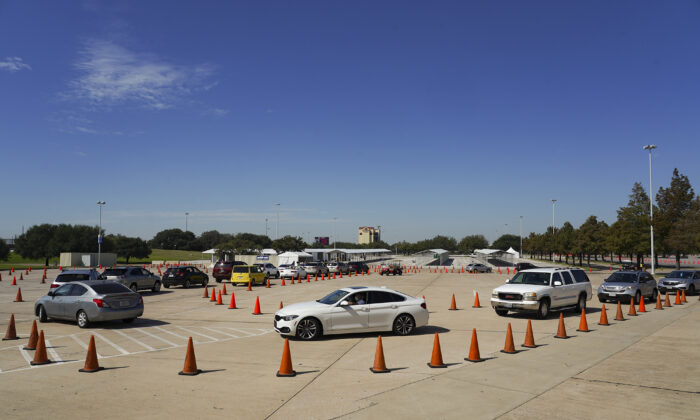 Voters in cars line up at a drive-through mail ballot drop-off site at NRG Stadium on Oct. 7, 2020 in Houston, Texas. (Photo by Go Nakamura/Getty Images)
US News

A former Washington and Georgia election official who has just begun a new job running elections in Texas’s most populous city owes the IRS some $100,000 in taxes and has garnered criticism for past election problems on his watch.

After a five-person committee made a final vote on Aug. 16 to give him the job, Clifford Tatum started as Harris County elections administrator on Aug. 24.

Siegel told The Epoch Times she made a motion to rescind the offer last week after the information concerning Tatum’s IRS liens and past job performance came to light.

However, her motion was ignored by the remaining Democratic members of the hiring committee who then cast the final vote to employ Tatum, ending any debate.

“There was no discussion that I personally felt strongly should have been made at least as part of the public record,” she added.

The hiring committee was told Tatum passed the background check, which isn’t performed until after a job offer is made, Siegel said.

The recruiter assisting with the search never disclosed Tatum’s IRS lien or past problems with elections.

Siegel said she asked the county attorney to look into the matter before the final vote to no avail.

Last week, state Sen. Paul Bettencourt (R-Houston) began sounding the alarm after it became clear Tatum would be the new election administrator for Harris County, home to Houston with more than 2 million residents.

Bettencourt posted on Twitter a document showing Tatum had a federal tax lien of $108,209 filed against him in Washington in October 2021.

With Tatum owing a total of $113,127 in federal IRS liens, Bettencourt questioned his ability to run elections if he couldn’t pay his taxes.

The report in Bettencourt’s post showed a July 5 date, the day Tatum’s preliminary selection was announced.

The Epoch Times made calls and sent emails to the Harris County elections office seeking comment from Tatum, who has not responded.

Emails and phone calls to Harris County Judge Lina Hidalgo, who was on the election committee, were not returned.

Harris County attorney Christian Menefee did not respond when contacted by The Epoch Times seeking comment either.

Tatum said in a statement to the Houston Chronicle that the tax matter was personal and unrelated to his career.

He told the publication he had been in contact with the IRS and expected to resolve the issue by the end of the year.

According to an online biography, Tatum served as general counsel for the U.S. Election Assistance Commission. He was the former director for the District of Columbia Board of Elections and an elections attorney providing elections consulting.

Besides issues with the IRS, Bettencourt pointed to news articles showing problems while Tatum was in charge of Washington elections.

The Washington Examiner ran a December 2012 article saying Tatum admitted to “missteps” during the Nov. 6 election while serving as election chief, with one local official comparing the experience to “voting in a Third World country.”

A Washington Post article highlighted by Bettencourt recounted problems with voting machines during an August 2014 election that led to “lengthy and chaotic” vote tabulation while Tatum was executive director.

About 4,000 Republican and 6,000 Democratic ballots were overlooked during the election night count.

Harris County is no stranger to election controversy.

It is currently undergoing a state-run forensic audit of the 2020 election.

The Democratic-controlled county allowed drive-thru and 24-hour voting during the pandemic, which drew criticism from Republicans.

Democrats, however, defended the measures as a way to promote voting.