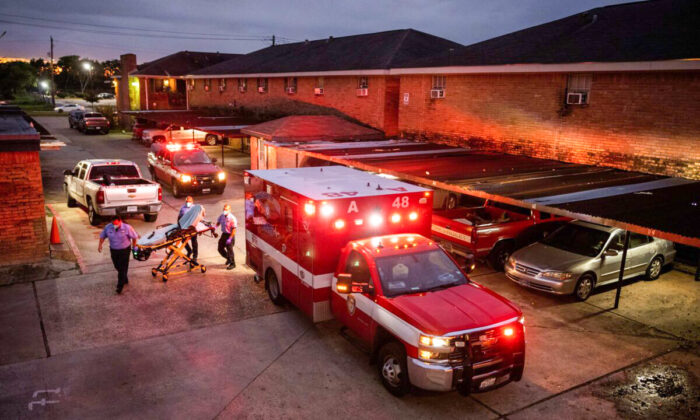 A Texas frontline doctor who has been critical of COVID-19 vaccines could lose her license following an anonymous complaint claiming she endangered a patient.

The complaint alleges Dr. Angie Farella, a pediatrician in Webster, Texas, endangered a patient who arrived at a hospital with breathing problems in 2021.

Farella must appear before the Texas Medical Board on Sept. 9.

“I think it’s a political hack job,” she told The Epoch Times. “I think someone Googled me and saw that I was outspoken and didn’t like that.”

The incident that triggered the complaint began when the patient’s parents weren’t satisfied with the care she was getting at a hospital and called Farella. Farella spoke to the ER doctor who thought the patient could have COVID-19, although the patient had tested negative three times.

Farella offered to treat the patient at her facility. The ER doctor agreed and released the patient.

Farella believes the hospital wanted to diagnose her patient as having COVID-19. However, Farella found the child, who suffered from asthma, had developed pneumonia, which she treated with antibiotics.

Under Medicare, enhanced payments are made for eligible inpatient cases that use certain new products with current FDA approval or emergency use authorization to treat COVID-19, according to the Centers for Medicare & Medicaid Services.

“It was a hit to their pocketbook,” Farella said, adding the ER doctor would never have released the patient if they thought it was dangerous for the patient.

Farella kept her medical practice open throughout the pandemic and treated thousands of adults who sought her out.

At the Texas GOP Convention in Houston on June 17, Farella discussed treatments for COVID-19 with off-label drugs such as hydroxychloroquine and ivermectin, which have been used safely for years to treat other illnesses.

She became an outspoken critic of the COVID-19 vaccine, especially when given to children, some of whom have developed myocarditis, or heart inflammation.

Vaccine-associated myocarditis is a rare but real side effect of mRNA vaccination against COVID-19. Large-scale observational studies on hundreds of millions of vaccine recipients across three continents have identified the highest risk of vaccine-associated myocarditis in adolescent males, with rates as high as 107 cases per million in the teenage years, according to the American College of Cardiology.

For Farella, differences of opinion on treatment approaches are essential to advance science and medicine.

“We’re fighting back,” she said.

Other outspoken doctors, such as Dr. Robin Armstrong, a Galveston County commissioner, have faced similar anonymous complaints. Armstrong told The Epoch Times the complaints filed against him were recently dismissed, but mounting a defense was costly and time-consuming. Armstrong advocated using hydroxychloroquine at a nursing home with good results during the pandemic.

Dr. Mary Talley Bowden of Houston announced in the spring she is fighting three anonymous complaints that could jeopardize her medical license. Bowden, an ear, nose, and throat specialist, treated thousands of COVID-19 patients with ivermectin and hydroxychloroquine.

The U.S. Food and Drug Administration has not approved the use of either hydroxychloroquine or ivermectin for treating or preventing COVID-19 in humans. However, both drugs are FDA approved for other diseases and can be taken safely as directed by a doctor.

Texas state Sen. Bob Hall, a Republican, held a press conference in April calling for legislation in 2023 to reform the Texas Medical Board, with 19 members appointed by the governor. The board accepts anonymous complaints for anyone and the doctors do not know their accusers.

The board’s communication division only offered a voice mail message instructing media to email questions. The Epoch Times did not immediately receive a response.

Hall wants the board to only accept complaints from patients, their families or caregivers. The complaints should consist of sworn notarized statements, and that doctors subject to investigation should be given a copy of the complaint.