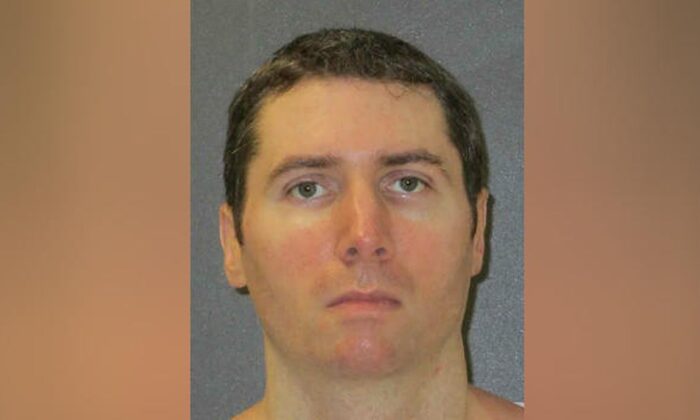 Justin Hall, 38, received a lethal dose at the state penitentiary in Huntsville for the October 2002 killing Melanie Billhartz (Texas Department of Criminal Justice)
US News

A Texas inmate who belonged to a white supremacist gang was executed on Wednesday night for the slaying of a woman about 20 years ago.

Justin Hall, 38, received a lethal dose of pentobarbital at the state penitentiary in Huntsville for the October 2002 killing Melanie Billhartz, according to CBS News. Prosecutors said that he killed her because he was afraid she would alert police over his drug operation. Officials charged him with a second killing later on, the report said.

Before he died, he apologized “from the bottom of my heart” to the families of two of his victims “for the pain and suffering I caused.”

“It should never have happened,” he said. CBS described Hall’s eyes as “red and watery” as he apologized.

Hall’s mother and half-sister watched through a window several feet away, telling them that he loved them. “I’m going to miss you all,” he also said before his death.

Texas officials administered him a lethal dose of pentobarbital before he took several deep breaths before he started snoring. His body movement then stopped, the CBS report noted.

Hall said that he killed Billhartz, 29, at his drug house in El Paso before burying her body in New Mexico.

She previously accused another man who went to the drug house of assault. Hall, who was the local head of the Aryan Circle, was afraid that police would find out about his drug operation.

In 2016, after spending time in prison, he publicly stated that he needs to be “put down like the rabid dog that I am” after stopping his appeals and stopped contacting his lawyers.

“I do not like the person I have become, and I need to be put down like the rabid dog that I am,” he wrote to a judge in 2016, reported the Texas Tribune. “These walls 24/7 have broken me. It is taking every last ounce of will to even make it from day to day.”

Hall had previously maintained his innocence until 2017 when he admitted to killing Billhartz and requested an execution date, the Tribune reported.

“I killed Melanie, and I killed [second victim Arlene Diaz]. And I accept the punishment for it, and I’m ready to get it over with, you know,” Hall said at the hearing, according to The Associated Press. Officials said that when he killed Billhartz, he was out on bond after being charged in the death of Diaz, 28, of April 2002.