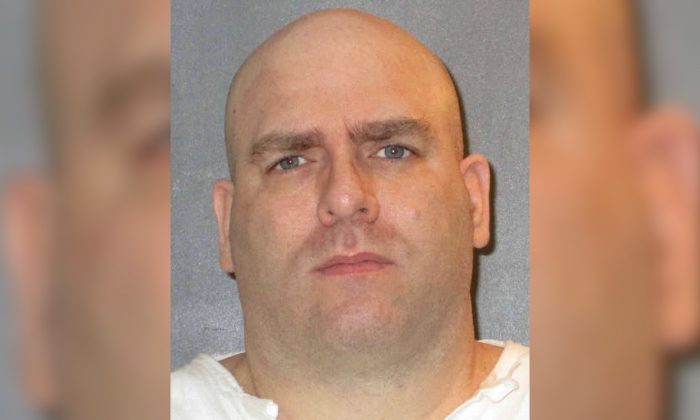 Death-row inmate Larry Swearingen is shown in this photo in Huntsville, Texas, provided on Aug. 20, 2019. (Texas Dept of Criminal Justice/Handout via Reuters)
US News

HUNTSVILLE, Texas—A Texas death row inmate who argued that his conviction was based on junk science was executed Wednesday for the abduction, rape and killing of a suburban Houston community college student more than 20 years ago.

Larry Swearingen, 48, received a lethal injection at the state penitentiary in Huntsville for the December 1998 killing of 19-year-old Melissa Trotter. She was last seen leaving her community college in Conroe, and her body was found nearly a month later in a forest near Huntsville, about 70 miles (110 kilometers) north of Houston.

Swearingen, who had always maintained his innocence in Trotter’s death, was the 12th inmate put to death this year in the U.S. and the fourth in Texas, the nation’s busiest capital punishment state. Eleven more executions are scheduled in Texas this year.

“Lord, forgive them,” Swearingen said after the warden asked if he had a final statement. “They don’t know what they’re doing.”

Then as the lethal dose of pentobarbital began, he said he could “hear it” going into a vein in his arm, then that he could taste it.

“It’s actually burning in my right arm. I don’t feel anything in the left arm,” he said.

Almost immediately, he took a short breath, then started to snore quietly. He stopped moving.

He never opened his eyes and never looked at the witnesses who were there on his victim’s behalf, including her parents, who watched through a window just a few feet from him.

At 6:47 p.m. CDT — 12 minutes after the lethal dose started — Swearingen was pronounced dead.

Prosecutors said they stood behind the “mountain of evidence” used to convict Swearingen in 2000. They described him as a sociopath with a criminal history of violence against women and said he even tried to get a fellow death row inmate to take the blame for his crime.

Swearingen had long tried to cast doubt on the evidence used to convict him, particularly claims by prosecution experts that Trotter’s body had been in the woods for 25 days. His longtime appellate attorney, James Rytting, said at least five defense experts concluded her body was there for no more than 14 days, and because Swearingen had been arrested by then on outstanding traffic violations, he couldn’t have left her body there.

Swearingen, who was also represented by the Innocence Project, had previously received five stays of execution. He was put to death after the U.S. Supreme Court rejected his final appeal, which focused on allegations prosecutors used “false and misleading testimony” related to blood evidence and a piece of pantyhose used to strangle Trotter.

“I have absolutely zero doubt that anybody but Larry Swearingen killed … Melissa Trotter,” he said.

Blackburn said Swearingen killed Trotter because he was angry that she had stood him up for a date. At the time of Trotter’s killing, Swearingen was under indictment for kidnapping a former fiancée.

During a 2011 interview, Swearingen told The Associated Press that he was tired of being “demonized” for a crime he didn’t commit.

In addition to questioning the date of Trotter’s death, Rytting maintained a piece of pantyhose used to strangle Trotter was not a match to a piece found in Swearingen’s trailer. He also disputed prosecution experts’ claims dismissing blood found in Trotter’s fingernail shavings that was determined to not be Swearingen’s. He said that evidence supported the defense theory that someone else killed her.

In letters sent to Swearingen’s attorneys in July and August, the Texas Department of Public Safety said its technicians should not have been as definitive in their testimony about the blood found in the fingernails and the pantyhose match.

The 5th U.S. Circuit Court of Appeals last week turned down Swearingen’s challenge to the blood evidence and pantyhose match, citing the “mountain of evidence” that “seals Swearingen’s guilt for Trotter’s murder.” The appeals court disagreed with defense allegations that the testimony about the blood evidence and pantyhose match was false and misleading.

Blackburn said Swearingen tried to get people to lie to give himself an alibi. After his arrest, Swearingen got another inmate to write a letter Swearingen composed in Spanish that professed to be from the real killer and had it sent to his attorney. In 2017, Swearingen and another death row inmate, Anthony Shore, concocted a plan to get Shore to take responsibility for Trotter’s killing. Shore was executed last year.

Rytting said Swearingen was guilty of doing “some very stupid things,” but prosecutors didn’t have proof he killed Trotter.