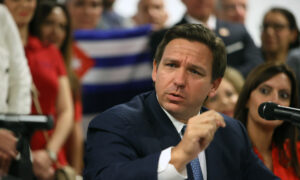 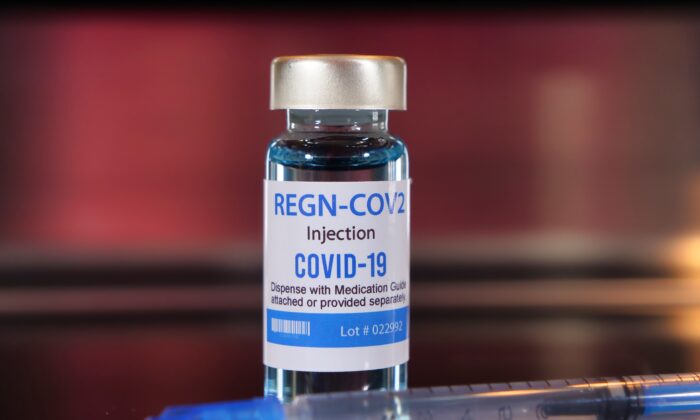 The Department of Health and Human Services (HHS) began to limit the distribution of the antibody therapy for COVID-19 on Sept. 3 to address a surge in demand for the treatment.

The department immediately limited orders only to sites that report their utilization of the monoclonal therapy to the government, according to a notice. The HHS is also vetting all orders against the rate at which the sites are utilizing the allotted doses.

The notice states that the change is temporary.

“We will continue to monitor product utilization rates, variant prevalence, and overall availability of monoclonal antibody therapeutics to determine when we will shift back to the normal direct ordering process,” the notice says.

The Republican governors of Texas and Florida put an emphasis on the use of the antibody therapy, arguing that it may reduce the number of COVID-19 hospitalizations.

Florida Gov. Ron DeSantis opened up the 23rd antibody infusion center in Florida on Tuesday. More than 63,000 doses of the treatment, manufactured by Regeneron, have been given to Floridians so far, according to the governor.

Jim Jackson, a Houston urgent care specialist, recently took to Twitter to voice concerns about the government’s involvement in ordering doses of the antibody therapy. Jackson orders his supply through Amerisource, a third-party affiliate for Regeneron. He was surprised to find out that he had to provide the company with other information besides ordering the product.

“This is what happens when government gets involved in things. Before I just told Amerisource how many doses I wanted and they sent them,” Jackson told The Epoch Times. “Now I have to inventory my entire supply room to count masks and gloves.”

The HHS notice states that the limitation on orders is meant to “help promote optimal and equitable use of the available supply.”

Jackson expressed concern over the use of the word “equitable.”

“This word suggests to me that they’re [federal government] trying to manipulate distribution of who they think should get this,” Jackson said.

Jackson placed an order on Monday and said the site was not “user friendly” and he worries that health clinics like his will simply “give up” because of the lengthy process it takes to order the product.

“It took me almost two hours to navigate the form,” Jackson said. “It is very complex and I almost gave up.”

Jackson said that he hopes this doesn’t deter other physicians from getting the treatments for patients who need them and said that the form was “data driven.”

“I think the form was geared more toward hospitals because of the questions they were asking,” he said. “They’re after data, I get that, but the length of the form was complex and I had to inventory my supply room just to answer the questions. They wanted to know how many hospital beds I had.  I’m a doctor’s office, not a hospital.”

‘Ahead of the Curve’

Jackson gave praise to the Florida governor and said that because of his efforts, it put Florida “ahead of the curve.”

“Texans still don’t know about it (monoclonal antibodies),” he said. “It has not been widely reported; this is a lifesaving treatment.”

“Today I estimate that for every 10 patients, nine of them were either positive for COVID or were worried they had the virus,” he said. “Most of patients—more than half—has never heard of the monoclonals.”

Regeneron’s treatment, called REGN-COV2, is a combination of two types of monoclonal antibodies. Monoclonal antibodies work by targeting the coronavirus spike protein, blocking the virus from entering the body’s cells and stopping the infection from spreading, according to the HHS website.

DeSantis has been introducing new antibody treatment centers since August.

“The state of Florida is working to ensure all the monoclonal antibody treatment sites have adequate supply to meet the needs of our communities,” said Christina Pushaw, DeSantis’s press secretary. “At this time, the sites do have sufficient supply, and DOH will continue monitoring this closely.”

In January 2021 under Operation Warp Speed, the U.S. government reached an agreement with Regeneron reached to purchase 1.25 million additional doses of the monoclonal antibody treatment. Regeneron was to deliver a total of 1.5 million doses by June 30, 2021.

The federal government covers the costs of the treatment to patients. The antibody therapy has been shown to sharply reduce hospitalizations and deaths when given to patients within a 10-day window of experiencing symptoms, via intravenous infusion or injections. When administered during that timeframe, the treatment appears to cut the rates of hospitalization and death by roughly 70 percent, according to DeSantis, who says he has “heavily researched and read data” on the virus and treatment options.

“COVID is not going away,” DeSantis said at a press conference. “We just have to learn how to live with it. We are still dealing with the 1918 flu, so I know this will hang on as well.”

Tammy Allen, spokesperson for Regeneron, said she has seen a spike in demand from a number of states.

“We have seen an increase in demand in recent weeks,” she said in a written statement to The Epoch Times. “They are largely located in the Southeast—Florida, Texas, Louisiana, Mississippi, and Alabama.”

Allen did not have the data on how many doses were distributed to each state. She added that the product that has been distributed has an “expiration date of 2023.”

At Tuesday’s press conference, the Florida governor promoted the vaccine but said it could take as long as six weeks to provide full protection.

“The antibody treatments can be given to patients who are already sick, with a more immediate effect,” DeSantis said.

The federal government has been distributing monoclonal antibody drugs to the states since last winter, but the treatments were underused due to a lack of awareness from physicians, low interest among the public, and the logistics of setting up areas to give them to patients via IV infusion.