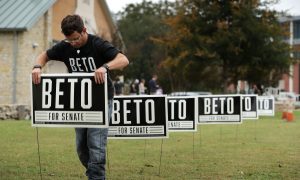 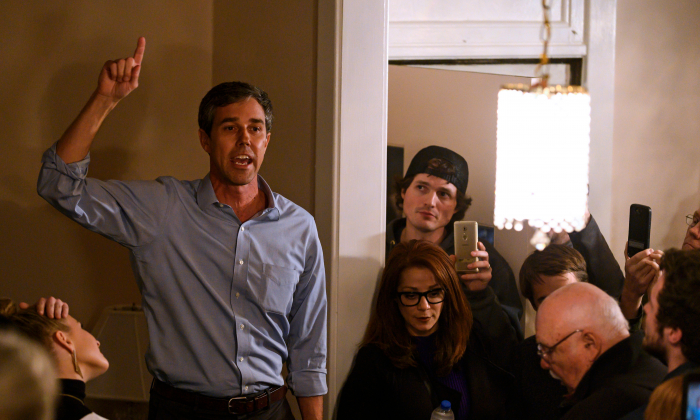 Texas Democratic Party Chairman Gilberto Hinojosa refused to name a single accomplishment made by presidential candidate Beto O’Rourke, in an appearance on Fox News on March 14.

The host, Ed Henry, repeatedly pressed Hinojosa to give an example of an accomplishment by O’Rourke, a former congressman who announced his bid for the presidency earlier that day.

“What would you say is Beto O’Rourke’s top accomplishment that he brings to the table?” Henry asked.

“I think what Beto O’Rourke has done, particularly in the last senatorial campaign that he ran in 2018, is … show the people of Texas and now the people of America what it means to be an honest politician, an honest person who is going to talk about things that are important to families all across this country. You don’t always see that,” Hinojosa answered.

Hinojosa then pointed out that Republicans controlled the House of Representatives during the entirety of O’Rourke’s six years in office.

“Sir, but did he create a job somewhere? Did he create a product? What has he accomplished? It is an honest question,” Henry pressed. “I’m not even talking about Congress. What has he gotten done in his life, sir? Has he created a job?”

“Your question is meaningless,” Hinojosa concluded.

O’Rourke announced his candidacy in an internet video on March 14 and began campaigning in Iowa. In the announcement video, he positioned “climate change” as an existential threat and suggested that America’s economy and democracy are in a crisis.

I am running to serve you as the next president. The challenges we face are the greatest in living memory. No one person can meet them on their own. Only this country can do that, and only if we build a movement that includes all of us. Say you’re in: https://t.co/EKLdkVET2u pic.twitter.com/lainXyvG2n

O’Rourke is embracing the socialist Medicare for All and Green New Deal plans, which, by some estimates, would triple the tax burden on American taxpayers. He repeatedly refused to disavow socialism in a profile aired by the BBC last year.

In Iowa on March 14, O’Rourke discussed packing the Supreme Court with Democrats, said that the people drafting climate change proposals are akin to D-Day soldiers and lamented that Americans who live in rural areas don’t have access to Tinder, a popular dating app.

O’Rourke is one of 15 Democrats who has announced a 2020 bid. In an average of early polls tallied by Real Clear Politics, he trails former vice president Joe Biden by almost 24 points. Biden has not announced his candidacy but is widely expected to do so.

O’Rourke gained national attention running a long-shot bid for the U.S. Senate in Texas against Sen. Ted Cruz (R). O’Rourke lost the election but has worked to remain in the public eye, including doing an interview with Oprah Winfrey.

In February he staged a rally in El Paso to compete with the one held by President Donald Trump nearby on the same day. The crowd watching Trump’s speech dwarfed the one gathered for O’Rourke, earning a jab from Trump.

“That may be the end of his presidential bid,” the president added.