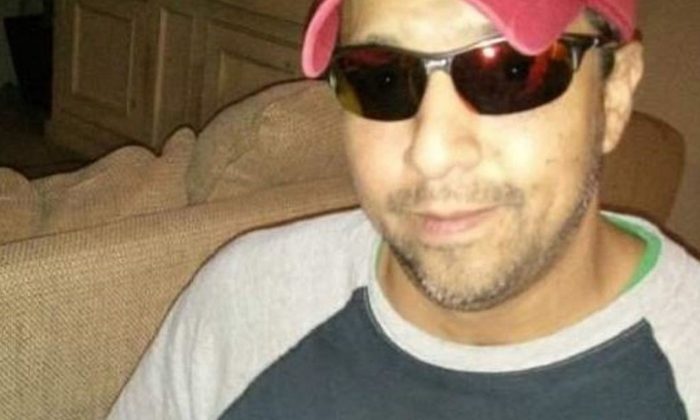 Eric Garcia ended up in a coma during an alleged fight with his daughter's boyfriend in Austin, Tx., on March 23, 2019. (GoFundMe)
Crime and Incidents

A Texas man is “fighting for his life” after police say his daughter’s boyfriend assaulted him following a dispute.

Eric Garcia of Austin confronted his daughter’s boyfriend after overhearing him calling the girl derogatory names during an argument, CBS Austin reported, citing a police statement.

Garcia then asked 24-year-old Jamie Apodaca—who had been dating his daughter for about a month—to leave his home.

Apodaca left the residence but returned sometime later and got into an argument with Garcia.

“The father entered the room where the two of them argued, and the victim’s daughter says Apodaca struck her father in the upper body,” police said in an affidavit cited by KEYE.

‘Attempted to Fight Back’

Apodaca allegedly struck Garcia several times inside the home, and punched his daughter, causing one of her teeth to fall out of her mouth.

“The daughter told investigators her father attempted to fight back, but Apodaca struck him, causing him to fall to the ground,” KEYE reported, citing the police.

An unidentified other individual inside the house also suffered injuries in the altercation.

The dispute continued outside the residence, KEYE reported, where Apodaca allegedly punched Garcia, causing him to fall and hit his head on concrete “leaving a blood stain behind.”

“His heart quit beating on the driveway and it took over 15 minutes with the paramedics to get his heartbeat back,” the family wrote on a GoFundMe page.

This father is in a coma after defending his daughter against her #toxic abusive boyfriend. Here’s a real #feminist champion in the trenches. https://t.co/0oQs7dY4ks

‘It Was Really Shocking’

Garcia’s injuries include a skull fracture, an inter-cranial trauma, and a herniated brain, according to KXAN.

“It was really shocking and it’s been a really tough couple of days just kind of hoping that he pulls through but knowing that he probably won’t,” Garcia’s friend Rock Schouman told the news outlet.

“He tried to split up a fight. He was such a quiet, nice, humble person, you know. He didn’t really deserve what happened to him,” Schouman told KXAN.

Schouman set up a Facebook donation page, where he wrote “please donate as much as you can spare to help this gentle soul on his fight for his life.”

He explained, “Garcia was assaulted outside of his home, and hit his head on the cement, causing major brain swelling and injury.

“He is on a breathing machine, and in the ICU in a coma. His future looks bleak.”

“I’m just really worried about his family because it’s not easy, especially if you have younger children. He has a 12-year-old daughter, so I just want to make sure that they’re taken care of because they can’t really fend for themselves right now,” Schouman told KXAN.

“Make sure the rent’s paid. Make sure there’s food. I don’t want his kids to lose their home. I don’t know what the future’s going to hold for them. I want to keep the lights on, keep the roof over their head for a while until they can figure out what they need to do.”

Apodaca was arrested and booked into Travis County jail.