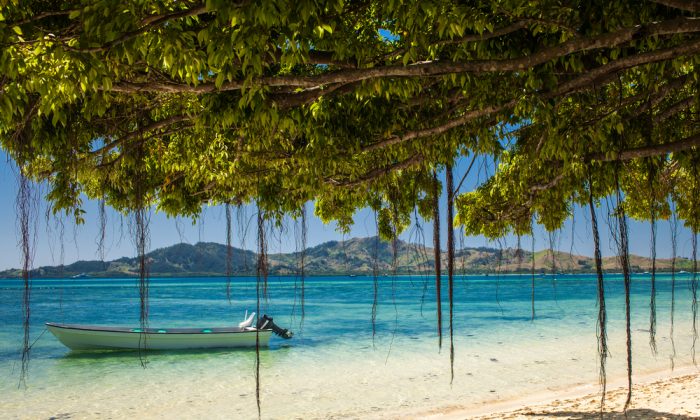 Boat and trees on a tropical beach in Fiji Islands. (Shutterstock*)
US News

Texas Couple Who Died in Fiji Emailed Relatives: ‘Throwing up for 8 Hours’

A Texas married couple who died while on vacation in Fiji sent emails about being violently ill before their deaths. However, the messages didn’t seem to indicate their lives were in danger.

David and Michelle Paul died just days after arriving in Fiji on May 22, according to reports.

Relatives told ABC News that the couple sent them emails about several symptoms they were having, including vomiting numerous times.

A young Texas couple died of a mysterious illness while enjoying an “amazing vacation” in Fiji, according to their family. https://t.co/jOmZhQLEKd pic.twitter.com/KogqCjtMuQ

“We are both going to doctor now,” Michelle Paul, 35, wrote to her mother, Juliet Calanog, after they both arrived in the Pacific Island nation.

She said, “We have been throwing up for 8 hours. Dave has diarrhea. My hands are numb. We will text when we can.”

After they went back to their hotel, Michelle wrote another email, saying that they went to a health clinic.

COUPLE DIES ON VACATION: A Texas couple on a dream vacation to Fiji fell ill before their scheduled trip home and died at a local hospital. Early indications are they contacted some type of virus; they are survived by two children. @DavidMuir reports. https://t.co/oc765g0yvH pic.twitter.com/pGgbK1xnNE

Her mother responded and told her to drink a lot of fluids and rest. However, Michelle Paul died on May 25, and David Paul died two days after his wife.

The Fiji Ministry of Health said that officials are investigating the cause of death, after ruling out the flu.

“Influenza has been ruled out, and at this stage, we do not believe there is a risk to the public,” the Fiji Ministry of Health said in a statement. “It would be premature to speculate further on the cause of death until the investigation is complete.”

The Health Ministry said that five people, including people who came into close contact with the couple, were quarantined after the couple died. They are all “currently well,” the ministry said.

Tracey Calanog, Michelle’s sister-in-law, told WFAA that the two were “very physically fit,” saying that Michelle was a former student-athlete and David was a U.S. Air Force veteran. “They were planning an amazing vacation,” she added “They always wanted to explore.”

According to People magazine, Marc Calanog, the father of Michelle Paul, the couple left behind a son.

“I don’t even know how to say it to Ayden because [he] is 2 years old,” he told the news outlet. “Once I have it all more clear, I guess I’m going to start talking to a priest and ask him for help to see how I can tell this to Ayden.”

Marc Calanog said he and his wife are now the primary caretakers of the boy.

“Overall, we will recover,” Marc added. “There’s no question because our focus now is on what to do with Ayden. We cannot be depressed and [not] have a clear mind because we have to handle this responsibility.”

The Fiji Broadcasting Corporation reported that police on the island have confirmed that an illness caused their deaths. The report added that further testing on the remains will be done overseas.